Inland Fisheries Ireland has appealed to anglers and the general public to be vigilant and report the presence of any Pacific pink salmon encountered in Irish river systems over the coming months. In 2017, this non-native fish species unexpectedly appeared in unprecedented numbers in multiple river systems in the south-west, west and north-west of the country.

As pink salmon predominantly have a two-year lifecycle, there is potential for the species to reappear in Irish rivers again this year and every second so called ‘odd’ year thereafter. However, they can also turn up in ‘even’ years and a single specimen was recorded in the River Suir in 2018.

Also known as humpback salmon, pink salmon are a migratory species of salmon, native to river systems in the northern Pacific Ocean and nearby regions of the Bering Sea and Arctic Ocean. The species also has established populations in rivers in northernmost Norway and in the far northwest of Russia, originating from stocking programmes undertaken in this part of Russia since the 1950s until 2001.

Although a single specimen was first recorded in Ireland in 1973, they were very rare in Irish waters until 2017. In the past week, pink salmon have been reported returning to rivers further south in Norway than anticipated which increases the likelihood of their reappearance in Irish rivers this year.

Dr Cathal Gallagher, Head of Research and Development at Inland Fisheries Ireland said: “The potential presence of pink salmon in Irish rivers again is of ongoing concern to Inland Fisheries Ireland as its presence in large numbers may negatively impact some of Ireland’s native species such as Atlantic salmon and sea trout as well as estuarine and coastal marine fish species and their associated ecosystems.  Despite only very limited information being currently available to assess such threats, the climatic and environmental conditions in Ireland are considered quite amenable to facilitate the establishment of Pacific pink salmon populations in Irish river systems.” 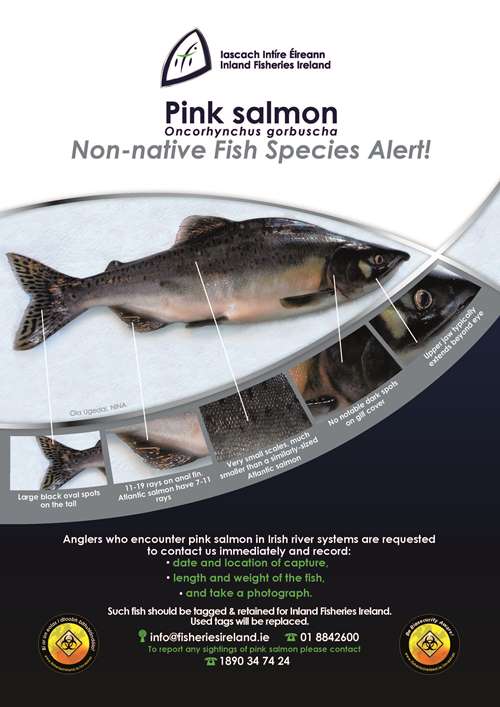 Anglers are asked to report catches of pink salmon to Inland Fisheries Ireland’s 24 hour confidential hotline number – 1890 34 74 24 or 1890 FISH 24. As these fish die after spawning, some dead specimens could also be encountered along Irish rivers.  Anyone who catches a pink salmon is asked to:

Take a photograph of the fish

Record the date & location of capture, and the length and weight of the fish

Inland Fisheries Ireland will then arrange collection of the fish for further examination. This will help establish the abundance and extent of distribution of the species in Irish waters.