On 13th May 1835 the convict ship Neva transporting Irish prisoners was wrecked off the coast of Tasmania. It was one of the largest maritime disasters in Australian history and one of the greatest tragedies in nearly a century of convict transportation. Yet in Ireland it’s mostly unknown overshadowed by disasters closer to home like the Lusitania, Leinster and Titanic.

But the Neva, carrying so many Irish people, is an important piece of our maritime history and deserves to be remembered every bit as much. 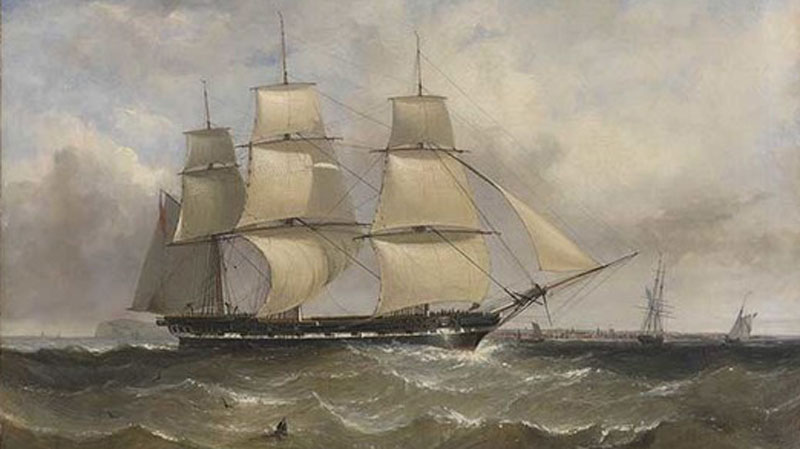 In January 1835 the Neva set sail from Cork. The three-masted barque was formerly used to transport goods and was refitted with a second deck to serve as a prison. Its destination was a penal colony in Van Diemen’s Land (now Tasmania).

On board were 150 female convicts as well as nine free women, many of whom were wives of men already banished. There were also 55 children, mostly very young babies. The crimes of the women varied from petty theft, prostitution to more heinous crimes but the punishment for all was nothing less than exile.

By the time the ship had reached the Australian coast in May 1835, the total number on board had reached 239, with the deaths of a crewman, one convict, one free woman and a birth.

On 13th May 1835, in the early hours of the morning when prisoners were still locked below deck, the ship struck a reef. The ship had run off course into shallower waters during the night but by the time they crew noticed it was too late. The Neva began to break up and water poured in below decks. The woman and children rushed to the upper deck but there wasn’t enough boats to save them.

Passengers and crew swarmed onto the few boats that were there but they floundered under the weight. In the end only 22 made it to land and of them another 7 of them died during the night from exposure and exhaustion. The remaining 15 survivors set up camp salvaging what they could from the remains of the ship and were rescued six weeks later.

The death toll was 224, nine of the crew and only six female passengers survived.

Rose Ann Hyland was one of the most troublesome convicts aboard the Neva. Here is her account of her amazing escape:

“When the ship struck, I was in bed in the black hole that night … The Captain ordered the ladder to be hauled up, and that we, who had been in the black hole, were to be kept down, but myself and other two succeeded in getting on deck. Most of the other Women, who had been in the main prison, had got on deck and into the Cuddy where they were drinking, and some of them were so drunk as to be unable to help themselves. I was on the Poop when the Ship opened, and … I stuck to this part of the Wreck, and went some part of the way on Shore upon it. When we came close to another part of the Wreck, upon which were some of the Sailors, I endeavoured to get upon it, when one of the Sailors caught hold of me and pulled me upon it. I fell off and was a second time caught hold of by the same man, and placed again upon the Wreck. When we got near the shore, this man (Sharp) jumped off the wreck and carried a Boy on Shore; he returned for me, and then for another woman.”