A new study shows low salmon survival when leaving freshwater is an important factor in declining European salmon populations, according to early results from a project examining the early migration phase of salmon smolts (young salmon) from rivers across Europe.

Leading salmon scientists from Denmark, Spain, Sweden, UK and Ireland are today attending a meeting in Dublin, hosted by Inland Fisheries Ireland, to mark International Year of the Salmon. The scientists will discuss some of their new findings from the international SMOLTRACK project, the results of which reveal factors in the known decline of salmon stocks. 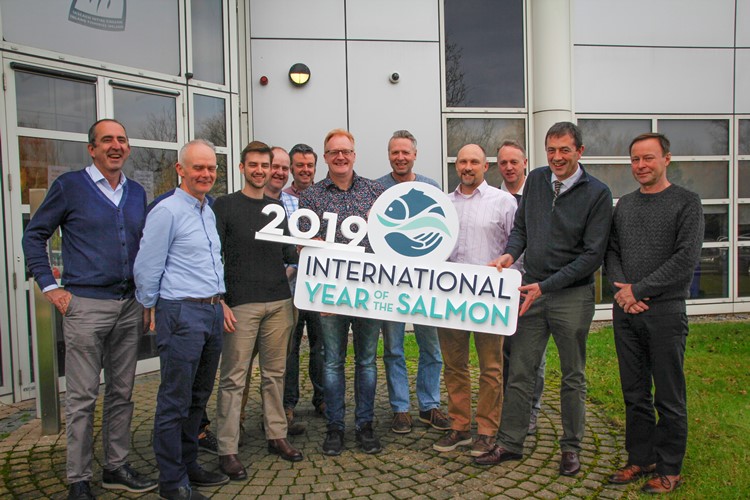 The SMOLTRACK Project aims to help determine the survival rates of young salmon as they move from rivers into the marine environment. Work commenced in 2017 and early results show that survival during movement from rivers to the sea is lower than expected. While it was already accepted that salmon are impacted by a number of factors when they migrate at sea including the effects of climate change, limited feeding opportunities and sea lice-induced by fish farms, the low survival rate in river systems which is presenting in this research is a new development.

The low survival of smolts in some river systems could be attributed to changes in temperature and flow while predators have also been shown to impact on the numbers entering the sea. The survival of smolts varies by catchment and in a bad year, survival of smolts can be three times lower than in a good year. These results will be published in international journals on completion of the research.

The international project sees scientists from each participating country tag salmon smolts with miniaturised acoustic and radio transmitter tags in rivers in their own country, and track their migration journey through the lower parts of rivers, estuaries and coastal areas. This study includes populations in Southern Europe which are most vulnerable to climate change. In Ireland, this work is being carried out in the River Erriff, Inland Fisheries Ireland’s National Salmonid Index Catchment (NSIC).

In addition to the activity in Ireland, tagging is being carried out on the River Bush (Northern Ireland), River Tamar (England), River Ulla and River Minho (Spain), River Göta and River Högvadsån (Sweden), River Skjern and River Storaa (Denmark). This information will help scientists to understand the survival rates of salmon smolts during their migrations under varying conditions ranging from cooler climates in Sweden to warmer climate in Spain. Already SMOLTRACK is providing new data on the initial migration of salmon smolts which will inform future management and conservation measures for this iconic species.

Dr William Roche, Senior Research Officer at Inland Fisheries Ireland said: “Understanding and comparing early marine survival of salmon in EU waters is a key output of this project in addition to providing data on smolt run timing and migration behaviour. The project has established a European-wide counting, tagging and tracking system to monitor smolts and will also contribute to the understanding of the possible impacts of climate change.”

Dr Cathal Gallagher, Head of Research and Development at Inland Fisheries Ireland said: “We have seen a substantial reduction in the numbers of salmon returning to Irish shores in recent decades. This project is examining what is happening to our young salmon as they migrate to sea and what the international community needs to do to help salmon populations. While this research identifies issues in early mortality of salmon, this part of a salmon’s life cycle is where management actions can be targeted to support the future of these salmon stocks. International Year of the Salmon offers an opportunity to share knowledge across the Northern Hemisphere with a view to inspiring action and collaboration with a positive effect on salmon survival.”

International Year of the Salmon is a joint worldwide initiative of the North Atlantic Salmon Conservation Organisation (NASCO) and the North Pacific Anadromous Fish Commission (NPAFC) alongside other partners across the globe, creating an international framework for collaborative outreach and research. It is hoped that IYS will raise awareness of what humans can do to ensure salmon and their habitats are conserved and restored against a backdrop of several environmental factors.