Today, June 8th, is World Oceans Day. It’s a global day celebrating our oceans and a day to reflect on what we can do to help reduce our pollution into this vulnerable environment.

Many of us don’t realise how much of a vital and broad role the ocean plays in our lives: we use it as a food source, for sport and activities, for research and medicine, as a means of transport, not to mention its role as a unique home to millions of amazing marine creatures. It also plays a hugely significant role in regulating the climate, producing oxygen and absorbing carbon dioxide. Without it we would be lost, and the terrible truth is that we are destroying it with our careless behaviour. Millions of tonnes of rubbish end up in our oceans every year and 90% of all floating rubbish is plastic.

The theme for this year’s World Ocean Day is “Healthy oceans, healthy planet” and the key message is promoting the prevention of plastic pollution. It’s our duty to protect and preserve the ocean for future generations so we’ve come up with a list of things you can do to help and initiatives you should support to help keep our oceans clean and healthy.

Here’s just five easy ways you can contribute to a cleaner, better ocean:

This is not just something you learn to rhyme off in primary school this is something we should be practicing everyday. About half of the plastic we use are single use and of the plastic the world produces only about 5-10% is recovered. Some is repurposed but most ends up in landfills or worse out to sea. We can help by using cutting down on the amount of plastic we use. You can help by picking up reusable bottle, containers and flasks. 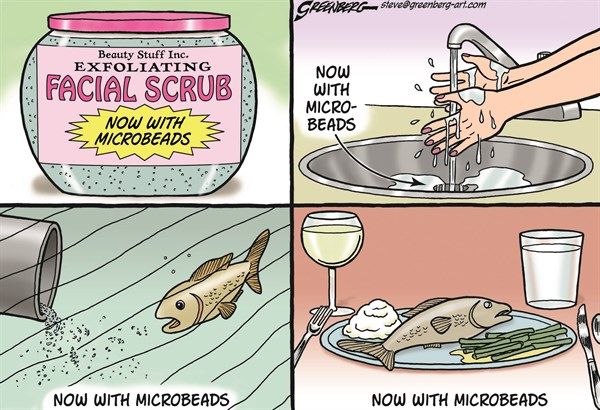 Microbeads are a tiny menace that wreak havoc on marine life. They are tiny little plastic beads found in facial scrubs and toiletries that get washed into the sea and are consumed about marine life. The chain of pollution doesn’t stop there, the toxic particles end up on our plate when we eat seafood. They are bad for fish and bad for us so we should try and stamp them out. Some countries have begun to ban microbeads in products but you can download a handy app to make sure your products are bead free.

Think sending off hundreds of balloons soaring into the sky is a great way to make a celebration? Think again! The old adage rings true ‘what goes up must come down’. The balloons released inevitably have to go somewhere and all too often that somewhere is in the stomach of wildlife. They end up in the sea and marine creatures mistake them for food and choke. Birds can get strangled in the string.

This is the easiest way to help, and if we all chipped in and gave two minutes to remove any rubbish when we visit our beaches it would make a world of difference. Clean beaches benefits everyone, it’s safer, it looks better and that rubbish that would have ended in the oceans if properly disposed of.

4. Think Before you Flush

Think Before You Flush is one of Clean Coast’s public awareness campaigns about the problem sanitary products and other items can cause on marine life and our water systems when they are flushed down the toilet. Using a little bit of common sense and if necessary changing your bathroom habits can really make a difference.

This is something fishermen can do to help. The initiative has been set up by Bord Iascaigh Mhara (BIM) and is based on KIMO’s Fishing For Litter which has been successfully running for over two decades in Scotland, South West England and the Netherlands. What makes the project  work is it is such a simple but effective idea. When trawlers cast out their nets they pick up all kinds of litter. This is usually separated from the fish and thrown back at sea. Now participating vessels in the scheme are given large bags to collect this litter and when they return to quays the is properly disposed of.  BIM established this scheme back in October in three ports Castletownbere, Union Hall and Clogherhead. Between these ports 24 boats have taken part so far, and BIM hopes that this will expand to fifty. Since it’s inception Clogherhead alone has brought in 2 tonnes of waste. They hope to expand this to 50 boats.

When it comes to cleaner oceans and seas, everyone has a part to play, and everyone benefits from a cleaner marine environment.