Wexford Diver Ivan Donoghue has achieved an impressive podium placement in the wide angle category of the British and Irish Underwater Photography Championship 2017.

Now in its third year, over sixty underwater photographers from all over the UK and Ireland dived last month took pictures and submitted them on the same day to a panel of judges. Donoghue’s exceptional photo saw him snap up the runner-up position in the fiercely competitive championship. 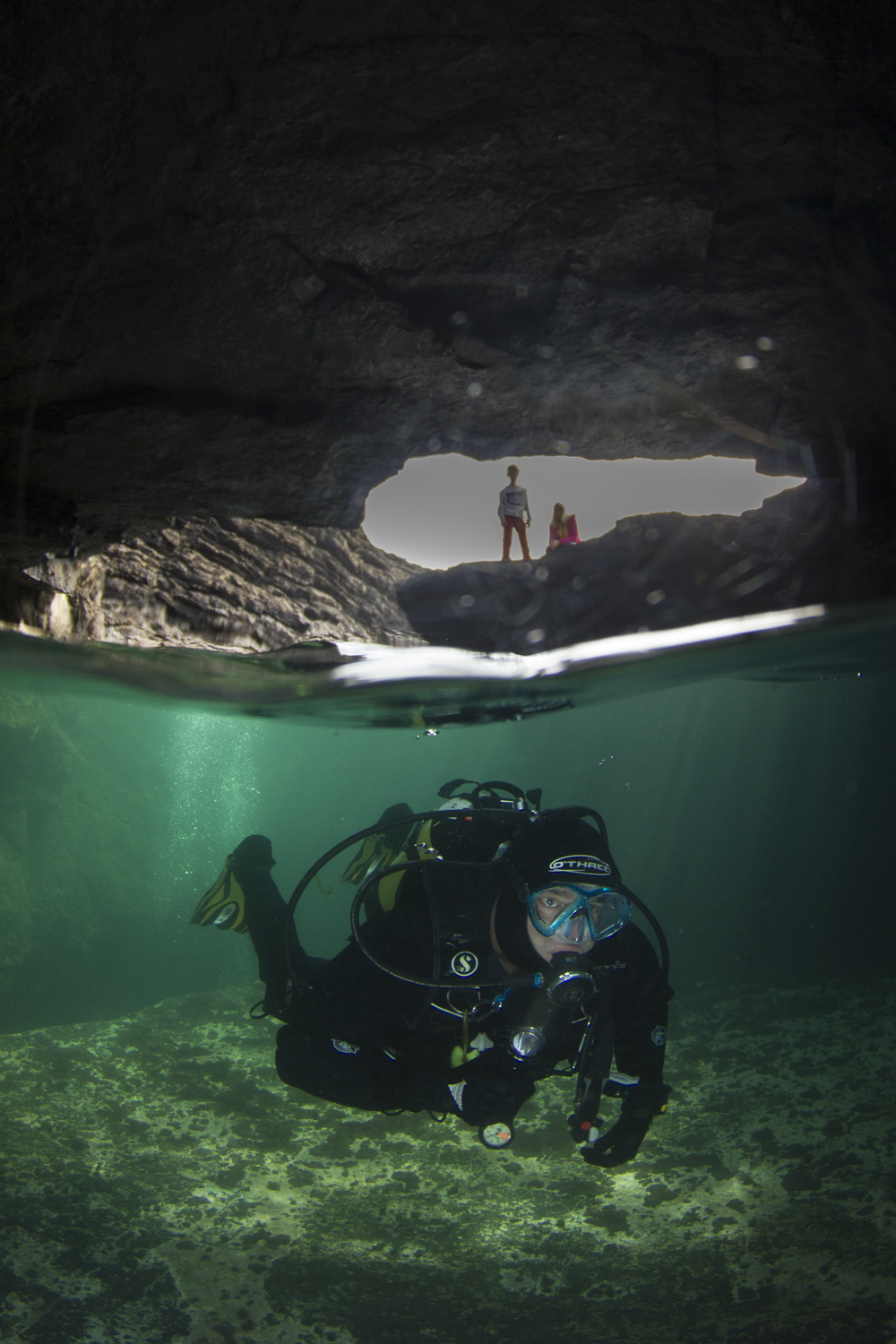 Organised by the British Society of Underwater Photographers in memory of Peter Scoones, one of its founding members, the competition is a major test of a photographer’s logistic, diving and photographic skills, as everything has to be done within 24 hours.

Ivan’s entry was taken at Hook Head and shows fellow club member Balazs Bauer enjoying the underwater scenery while two visitors look on from above. The picture missed out on top slot by just one point.

Ivan explains that “the image is known as a split-shot, where you aim to capture what’s happening above and below the surface at the same time. Technically there is several things working against the photographer including, water droplets, differing light, reduced contrast, particles, divers bubbles and trying to hold a camera at the right angle in a wave to capture above and below.”

“I’m lucky to photograph with a top class diver, Balazs Bauer. He has a unique ability to be envision a potential picture before I do and we work together as a team on these pictures.”


The competition enjoys excellent support from generous sponsors including Carpe Diem, a Maldives-based company that offers an amazing £1650 voucher to the winner for a trip on their superb dive boat. O’Three have sponsored the competition from inception and each year provide one of their sought-after tailored dry suits. There is a growing and friendly rivalry between the British and Irish communities, who have each seen their photographers taking high honours in previous years.

This year UK photographer Trevor Rees was awarded the title 2017 Champion after submitting a beautiful image of a Jewel Anemone set against a sunburst. It also won the best close-up category.

Best newcomer was another Irishman, Brian Kelly with a delightful picture of a Fan Worm and the other two categories were won by Kirsty Andrews for a stunning wide angle picture of a Blue Shark, and Vicky Paynter who used a compact camera to win the restricted camera category with a delightful image of a seal. Derek Bolton, from Cork, was highly commended in the restricted category.

British Society of Underwater Photographers Chairman and lead organiser Paul Colley said that, “The competition goes from strength to strength. More people are taking part every year and many of the images submitted now would have won the competition outright only a few years ago; the standards just keep climbing.”

You can see the full list of photographers, images, sponsors and awards at www.biupc.org. For more information about scuba diving or snorkelling in the south east, visit www.divewexford.org or www.diving.ie to find a dive club close to you.