A new partnership to build a massive undersea cable from Ireland to France was announced last week.  Ireland-France Subsea Cable Limited in partnership with Tiger Infrastructure Partners will construct 1FC-1, a state-of-the-art undersea cable that will be the first and only direct subsea cable between Ireland and France. 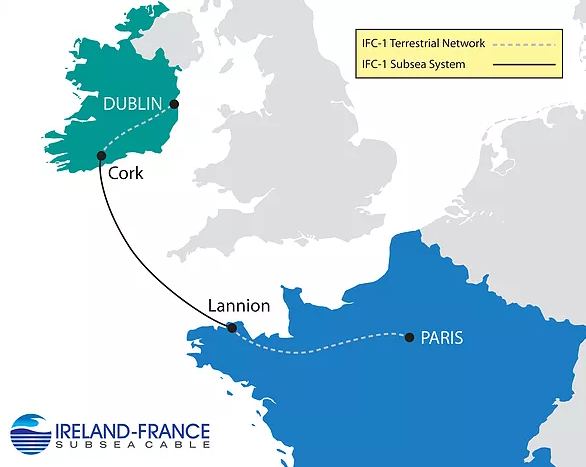 The IFC-1 system is a submarine fiber-optic cable that will provide ultra-high capacity transmission to large enterprises and telecommunication carriers in Ireland to provide connectivity with continental Europe.

The massive 565km cable will connect Dublin to Paris. It’s been designed to extend underground from Dublin to Cork, then run under water from Cork to Lannion and connect up to Paris. The system is scheduled to be ready for service in late 2018.


Michael Cunningham, Chairman of IFSC said “The massive growth of Ireland’s data center industry and the requirement for resilient telecommunications infrastructure has created the need for a new, direct route to continental Europe. We are delighted that Tiger Infrastructure shares our vision and look forward to having them as our partner.”