Two new shipwrecks have been discovered along the Connemara coastline. This area has a particular long and interesting maritime history most notable is the 16th century Spanish Armada disaster that claimed the lives of thousands of men. This region was a centre for sea trade during 17th and 18th but also a haven for smuggling.

The oldest of the two wrecks was discovered by John Bhada Jeaic Ó Conghaíle, a currach fisherman in Cuan Chaisín in Ceantar na nOileáin (an Irish speaking area of West Galway). This vessel is dated to around the 18th century and only barely visible at low spring tide. The wreck has been stripped of all the timbers and all that is visible is nodules of iron that can be seen on the sandy surface. The location of the wreck site is near to the a medieval castle at Cuan Chuigéil, a spot that is specifically mentioned for smuggling in the records in the early 18th century. 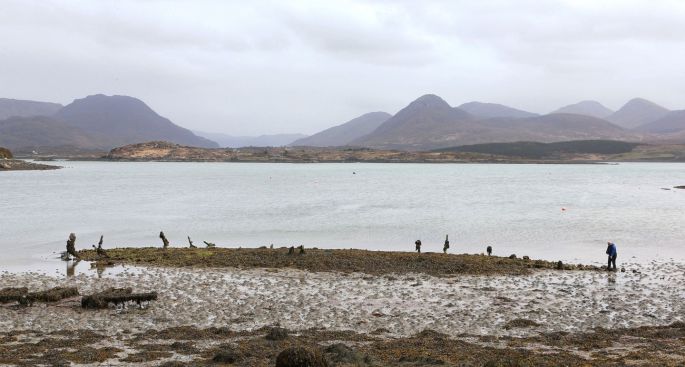 Shipwreck in Fahy Bay in Connemara. Image by: Joe O’Shaughnessy

The second wreck was found by another local Michael Barry in Fahy Bay in Northwest Connemara between Letterfrack and Cleggan. This ship is believed to be more recent, local archaeologist Michael Gibbons date it to around the 19th century though an excavation would be needed to get an exact date.