It’s pretty amazing the sort of stuff that gets washed ashore. With the wild Atlantic raging at the coast, the west is the perfect spot to discover some of the wonders, treasures and oddities offered up by the sea. 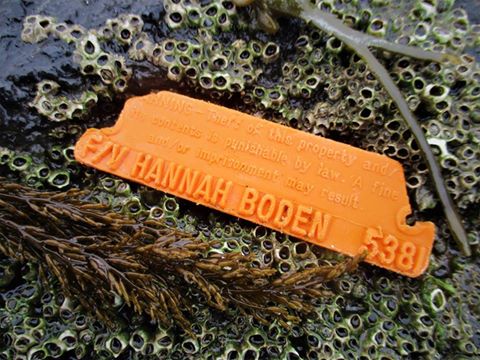 Last week avid beach comber Liam McNamara was at it once again this time discovering the tag from a very famous boat on Fanore beach.

McNamara runs a popular Facebook page Burren Shores Beachcombing & More where he shares some of his fascinating finds. He discovered the small tag with the name Hannah Boden tangled among seaweed  while walking on the beach last Tuesday. He immediately recognised the famous ship from the 2000 film ‘The Perfect Storm’.

Curious this was the tag from that same ship, McNamara got in contact with the crew of the Hannah Boden to check its authenticity. The tag indeed came from the boat was is off one of the Hannah Boden’s lobster pots. It traveled around 5,000 km across the Atlantic to wash up on the beach at Fanore.


In 1991 the Hannah Boden and her sister boat Andrea Gail went out fishing off Massachusetts when they got caught in the middle of a raging storm. The Andrea Gail sank with a loss of all hands, and despite the odds the Hannah Boden managed to survive, and the boat remains active today.

The amazing story of survival became the plot for the novel ‘The Perfect Storm’ which was later adapted into film with George Clooney.