December 19th 1940 | The lightship tender SS Isolda was on route from Rosslare with supplies for the nearby lightships when she was bombed by a German Condor.

The lightships provided a vitally important service to seafarers for over two centuries. People would live aboard these ships that anchored stationary at sea, providing a beacon in the dark for vessels that navigated the more treacherous parts of the Irish coast. These ships were faithfully assisted by ships that would resupply them and facilitate crew changes. The SS Isolda was one such ship. 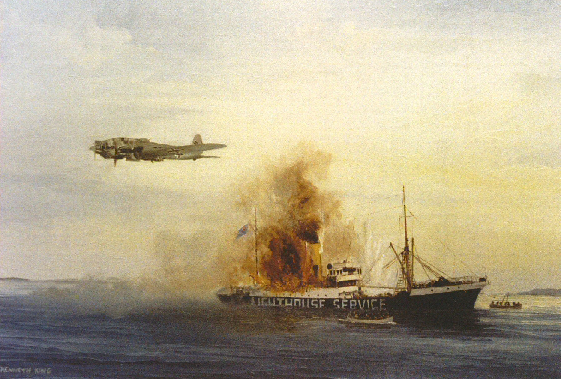 The Ship – SS Isolda being bombed – Painting By Kenneth King

Danger in the waters around Ireland greatly increased during the second World War. The Battle for the Atlantic was raging and Ireland’s location near important shipping lanes placed Irish vessels right in the middle of a conflict zone. As a result, many casualties were incurred on Irish ships despite their position of neutrality.

The SS Isolda was a lightship tender owned by the Commissioners of Irish Lights. The lightship service was considered neutral and the ship had ‘Lighthouse Service’ painted in large letters on both sides of the hull.

On December 19th 1940 she sailed out from Rosslare heading to re-supply nearby light-ships with relief crews and Christmas provisions. After placing the first crew at the lightship Barrels she then headed towards her next stop the lightship Coningbeg. But she didn’t make it very far, three miles out she was attacked from the air. 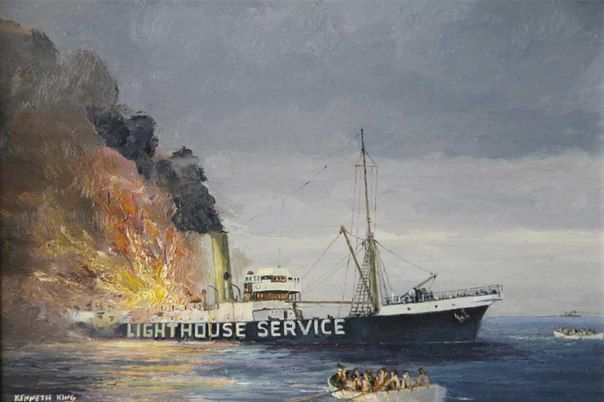 A German Condor flew over and dropped the first bomb on the ship. The plane circled around and dropped a second and sealing the ships fate. Realising the Isolda was doomed Captain Albert Bestic gave orders to abandon ship. Back on shore observers at the army lookout post at Carnsore Point looked on helplessly at the carnage. The next day the German High Command admitted that it was a German aircraft that had bombed the Isolda. 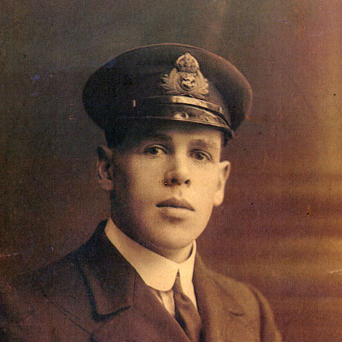 Survivors were picked up by boat and brought into Kilmore Quay, Co. Wexford. Six of the crew died and seven were wounded. Captain Bestic was among the survivors. This wasn’t his first brush with death having survived the ill fated Lusitania 25 years earlier when it was torpedoed by a German U Boat.