Easter weekend commemorates a momentous event in Irish history – the 1916 Rising. The Easter rebellion has proved to be a focal point in Irish history, paving the way to Ireland’s independence six years later. And this moment in Irish history is, as with so many, deeply entangled with the sea. After negotiating with the German government for support Roger Casement secured rifles and rounds to be dispatched on the ‘Aud’, to reach Ireland in time for the Easter Rising. His plans never came to fruition and this failed gun-running mission of the “SS Aud” dealt a blow to the rebels

A ship of many names

Originally the British merchant vessel ‘SS Castro’, she was captured in 1914 at the outbreak of the first world war by the Imperial German Navy and renamed ‘Libau’. Her relevance to Irish history began on the 9th April 1916 when disguised as Norwegian vessel ‘Aud’ and under the Command of Karl Spindler, she set sail from Baltic port of Lübeck. Significantly, she was loaded up with munitions that included 20,000 rifles, machine guns, giant bombs and 1 million rounds of ammunition to be brought to Ireland for use in the Rising.

However a communication mix up occurred which meant she couldn’t land the cargo in Fenit, Co Kerry on the 20th of April, as planned. Instead, Spindler and the ship attempted to sail for the safety of deeper water. In this time however the British Navy had formed a blockade and intercepted the ship and her cargo. Captain Spindler allowed the ship to be escorted towards Cork Harbour, in the company of the British navy sloop HMS Bluebell but en route he and his crew decided it was better to scuttle the ship. A number of the riffles were removed before the ship was scuttled and are now on display in museums in Cork, Dublin, Armagh and the Imperial War Museum in London. 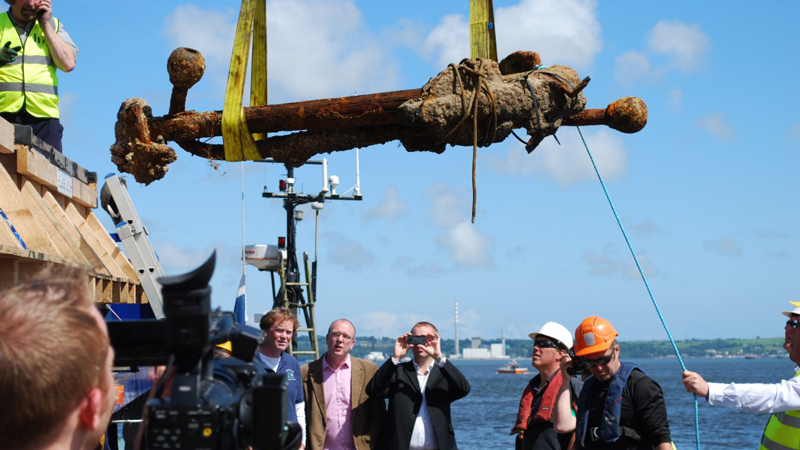 Aud anchor being removed in 2012

The wreck was discovered in Cork Harbour by divers in the 19702 and in 2012 anchors were removed underwent extensive restoration and conservation.