Twenty five years ago Irish waters were declared a Whale and Dolphin sanctuary thanks to a proposal by the Irish Whale and Dolphin group. While sanctuary’s had already existed elsewhere in the world, Ireland set the precedent by incorporating its entire exclusive fishery zone.

And so far it’s proven to successful in helping cetacean population numbers and a buoyant tourist industry has built up around them.

But times change and things aren’t all rosy.

Opaque fishing quotas under the European law mean it’s incredibly difficult to monitor what is being caught and at what cost to the environment. Super trawlers like the 144m Annelies Ilena and the Margiris, with its gross tonnage capacity of 9,499 tonnes, are now regular visitors to Irish waters and when they visit there is a far too coincidental surge in Dolphin carcasses washing up on the west coast. These ships have full clearance from Europe under the Common Fisheries Policy.

But in Irish waters, whales and dolphins are the lucky ones.

Sharks are not afforded anywhere near the same protections. And worse still sharks populations numbers are only vaguely known with discards and unreported landings a extremely large grey area.


Back in 2014 one of the world’s foremost authorities on sharks Dr.Pete Klimley was visiting Ireland as part of a public outreach program. He suggested that Ireland would be the perfect spot for a Shark Park, particularly around Inishowen, a known hotspot for shark activity. He said “I don’t think people in Ireland really understand what a jewel they have… I don’t believe there’s anywhere else in the world where you could see that.”

Is it time we afforded sharks at least some of the protections that whales and dolphins get? Is it time for a Donegal Shark park?

Some facts: There are around 30 different species sharks in Irish waters, one of the most impressive being the basking shark. They are the second biggest species of shark in the world, can grow up to 11 meters in length and visit Ireland from April to September. These immense creatures are gentle and harmless to humans, much preferring to feast on the plentiful plankton that live off our shores.

A shark park is something the Irish Basking Shark Study Group (IBSSG) is working on developing alongside a basking shark research and visitor centre off Malin Head. The IBSSG’s main aims are to educate, carry out research and gain further knowledge of Irish Basking Shark activity and populations. A shark park is a similar idea to a national park with a defined protected zone, in this case dedicated to the conservation and study of sharks. 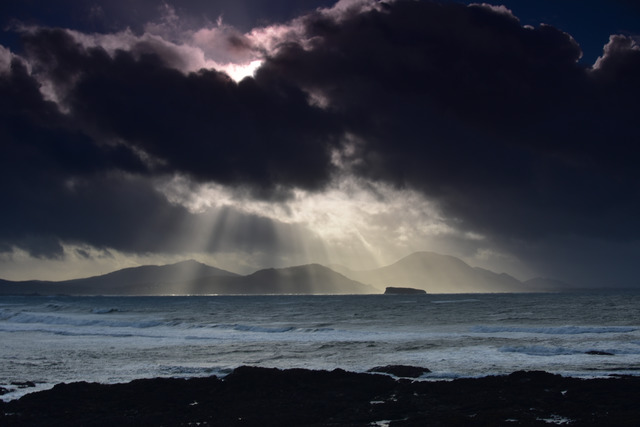 Globally, shark populations are decreasing with millions killed each year for their fins. So we should be concerned for their preservation and a shark park could be one way of helping our finned friends out. Twenty five years ago Ireland led the way and extended important protections to whales and dolphins, now it’s time to create similar protection for sharks as well.

Clean seas and clear conscience are the same thing: 5 simple changes to reduce your pollution