Villagers in Clogherhead might see the sight and run for the hills but fear not, the SeaFoodRocks’ 10 meter Octopus is a friendly giant! Perched on top of the old house on the festival site, this amazing sight will make you take notice. Made entirely from recycled and upcycled retired fishing equipment (that would have historically made its way to sea), along with plastic reclaimed by local groups and schools, this really is a remarkable project. 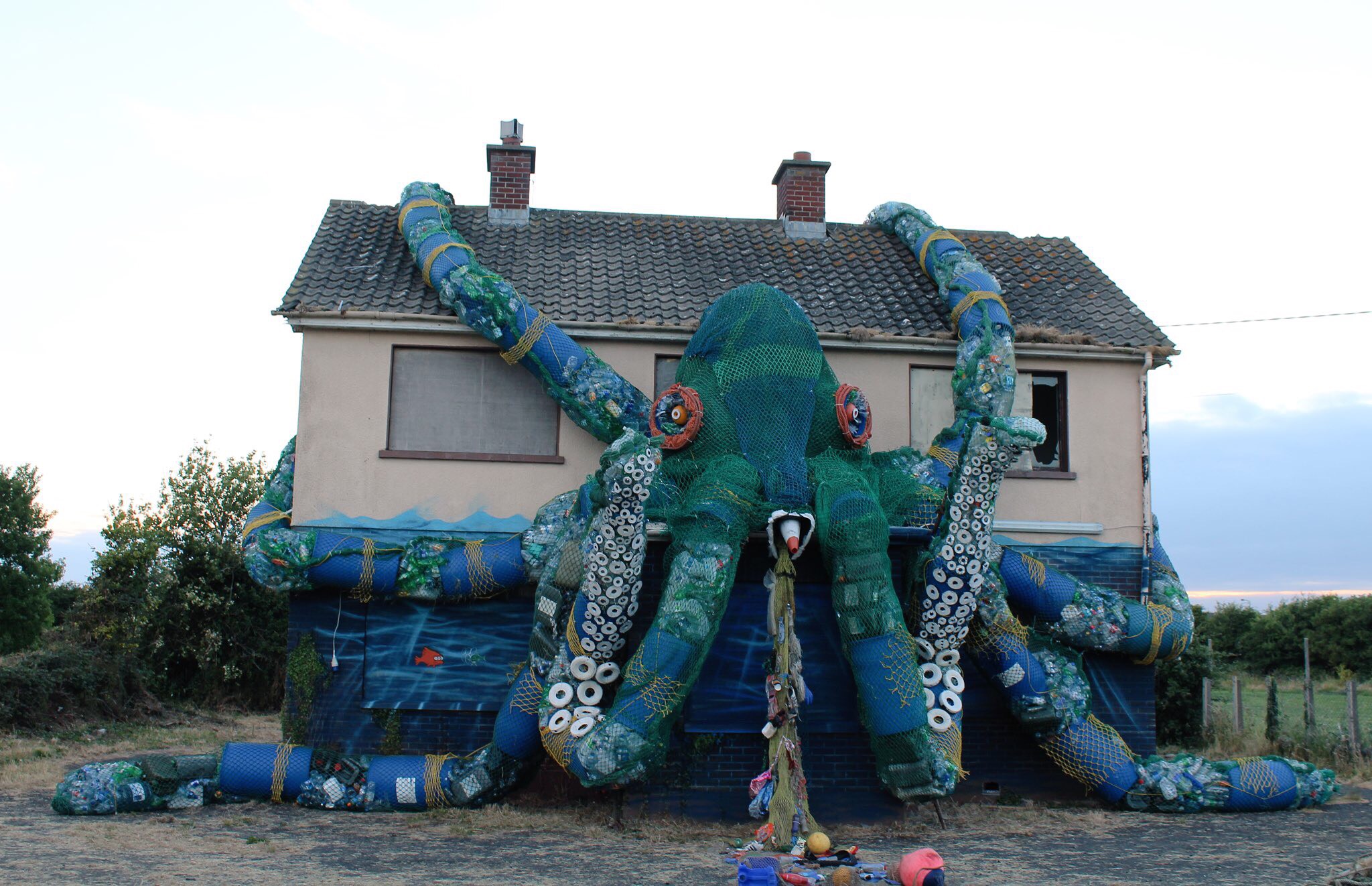 SeaFoodRocks Festival 2018 is taking place in Clogherhead, Co. Louth from 13th – 15th July and this year it’s going eco. The environmentally friendly plan is to reduce the amount of plastics and non-biodegradable waste on site and includes the massive marine waste sculpture.

The Clogherhead Community Group not only funded this project but Oliver Kirwan, who runs the Tidy Towns group, collected the litter on a regular basis from the boats as they landed. Clogherhead is really leading the way in the fight against marine waste; including the ‘Fishing for Litter’ initiative supported by Bord Iascaigh Mhara.

“Charles Preston of LPM Bohemia conceived the idea and along with Jig from Jigantics has forged on to create the beast with experienced help from local fishermen. Clean Coasts, Aston Village Educate Together, V&W Recycling and Dreadnots GAA Football Club contributed plastic waste to the project, so it has been a real community project.” said Damien Kierans from Red Fish Events.

“Most importantly we’d like to thank the fishing community of Clogherhead who contributed to the build with their time and materials. Without their expert net mending skills this project would have been unmanageable. Special thanks to Ricky Burke and Kevin Smith for leading the team. It’s great to see Clogherhead fishermen at the fore in making the ocean cleaner. ” continued Damien.

In a recent Facebook competition the gigantic octopus was christened ‘OctoAsh’ by Ashton Tallon, an Octopus crazy kid, who was hell bent on winning:“Ashton is completed obsessed with octopuses and anyone who knows him got behind my post, we’re all so thrilled for him. He can’t believe he got to name a giant octopus after himself, he even wore an octopus tie to his First Communion!!” said his delighted Mam, Rachel Tallon.

A new survey by the Sky Ocean Rescue recently revealed that 85 per cent of Irish people are concerned with the country’s plastic usage and more than 80 per cent believe plastic pollution is impacting local lakes and rivers on a daily basis. SeaFoodRocks 2018 hopes that OctoAsh will draw people’s attention to marine litter and make for talking point about the amount of plastic that is thrown into the ocean and coastlines every day.

“It’s a real sight to behold and at #SFR2018 we are very proud to steer this amazing project. There’s over 200 meters of retired nylon nets, 50 barrels, 50 twenty litre drums and 10, one ton bags of plastic. You won’t miss its imposing sight, as it will be lit up at night too. It is a impressive testament to everyone involve to have removed so much waste from the ocean and reuse it.” concluded Damien