The SEA-SEIS deep-sea research mission, currently onboard the Celtic Explorer deploying seismometers into the Atlantic as part of an ambitious project to map the earth beneath Ireland’s Atlantic waters, has begun engaging classrooms around Ireland with the goal to foster an awareness and appreciation for science and research in young people. 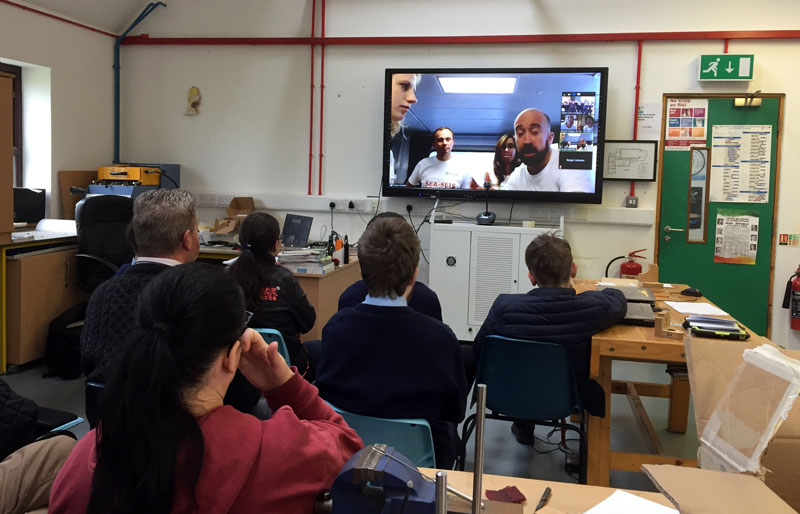 The SEA-SEIS team has been connecting via video links to classrooms in Dublin, Monaghan, Cork, Donegal and even as far afield as Italy. The research team onboard the Celtic Explorer has been able to answer student questions and share some of their experiences about conducting science at sea and more generally life onboard a research vessel in the Atlantic.

Highlighting the international appeal of the video links with scientists onboard a research vessel, one of the science team, PhD student Raffaele Bonadio, engaged with a school in Lamezia Terme, Italy. The event was even picked up on local news, as seen in the news footage below from Italian television.

“I think it’s a fantastic opportunity to engage with students and share our experience in real-time. As we chat with the students they see us on a boat in the Atlantic, they can see the waves in the sea, and how we react.” says Raffaele Bonadio. “They get to see science as an adventure, which it is very much is, and it’s great fun to be a part of it. The teachers have been fantastic facilitating the process.”

As part of the missions school’s outreach, lesson plans have been produced with the Marine Institute’s Explorers programme that can be used to learn about the mission and the science behind the project. You can find downloadable lesson plans at the link below.