The rise of sea levels sped on by human activity is now a fact of life with low lying islands around the world already feeling the effects. And it’s set to continue with increasingly significant consequences.

Some Scientists expect up to a 2 metre rise in global sea levels by the year 2100. In Ireland it’s perhaps easy to not think about it because extremes of climate have never been a feature of our collective experience (prolonged nationwide drizzle doesn’t count) but the consequences will certainly be felt here as well.

Coast Monkey took a close look at what the more extreme scenario of a 2 metre rise in sea levels would mean for coastal Dublin in the year 2100. We used the Sea level maps on Geology.com (http://geology.com/sea-level-rise/)

WHAT COULD THE FUTURE HOLD FOR DUBLIN? 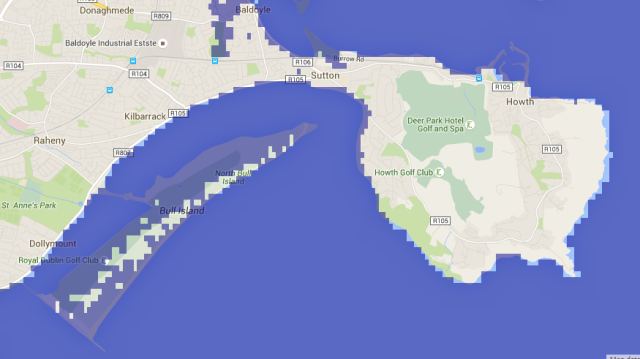 NORTHSIDE OF THE CITY

As can be expected there is a general pattern of sea encroachment all along the coast. But there are some particularly big hits to be taken and there’s some big changes coming.

1. Bull Island is gone. And no 3 ft sea wall will be making any difference to the Clontarf promenade when the waters rise here. Hard to imagine Dollymount strand completely gone even through it’s a relatively new comer to the Dublin coast appearing after the Bull wall was built in 1825.

2. Howth is on an inevitiable path to islandhood.  A rise of 2 metres doesn’t quite bring it about but it’s not far off.  The pinch point looks to be around the Suttonians rugby club.

3. Baldoyle is unexpectedly set to becomes a peninsula. 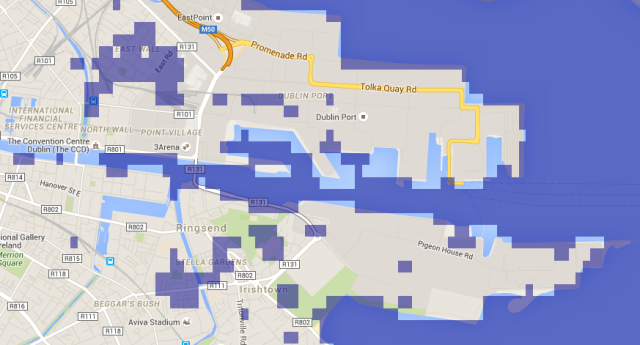 The City Centre is worst hit with sea water here penetrating furthest inland. It looks like a crazy game of space invaders as it gets pockmarked with new lakes.

4. East wall and Beggars bush will be home to new salt water reservoirs which probably won’t please the locals. Large parts of the city would have to be abandoned if this came to pass. On the plus side, there are going to some fantastic new fishing spots set among the derelict sky scrapers built in the boom of 2040. Can’t believe we went mad for the property again. Ah here!

5. Dublin port is going to have plenty more access points which is good news for commerce. Though the bulk of the population may have moved further inland at this point.  Safe to say the tech companies will be gone elsewhere to keep their feet dry. Probably Mullingar. 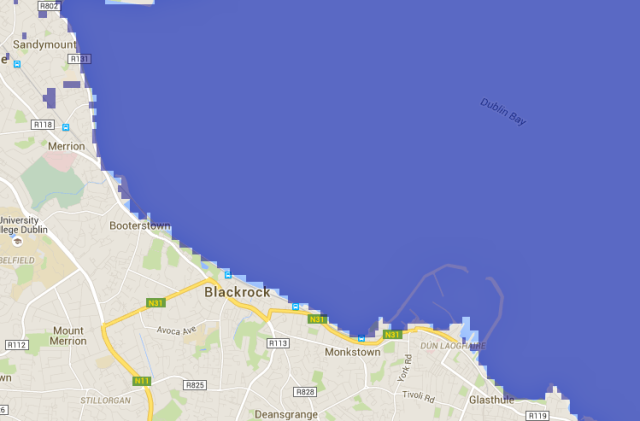 SOUTHSIDE OF THE CITY

6. No more DART. The Dart is going to take a bit of pounding, particularly on the Southside of the city where it more closely follows the contours of the coast. Perhaps it will become a feature of the Northside only but the likely erosion and water damage could very well see it’s life cut short entirely. So unfortunaltely the DART,  another new addition to the coast commencing in 1984, along with Bull Island looks set to go the way of the Dodo.

7. Dun Laoghaire Pier is gone. There’s really no escape for any structure exposed to the coast and Piers fits easily into that category. Dun Laoghaire Pier has seen some pretty big days particularly when the main mode of transport for foreign dignitaries like Queen Elizabeth was the boat. Built between 1855 and 1859, the piers lifespan seems all too short.

SO WHAT DOES IT ALL MEAN?

Well, a lot of great stuff we love is going to disappear. But that shouldn’t really be the prism through which to view these changes. Because really, it’s not about us, it’s about those Dubliner’s born around the year 2070. Some of us will get to meet them. We have a responsibility to make the problems we generate for that generation to be as manageable as possible. Sea levels are rising and how we interact with the environment now can play a big role in not hastening it. So what can the average East coast resident do to help the Dubliners of tomorrow? It starts with Reduce, Reuse, and Recycle.