The coastal village of Rosses Point, Sligo is steeped in seafaring tradition. Now in the 4th year, its Maritime Heritage Weekend is growing in popularity and is firmly established on the Irish Maritime Events calendar. Wonderful stories of exploration and nautical adventure will be brought to life in the atmospheric setting of Harry’s Bar amidst a huge collection of maritime memorabilia and photographs over the weekend 18-20 October. 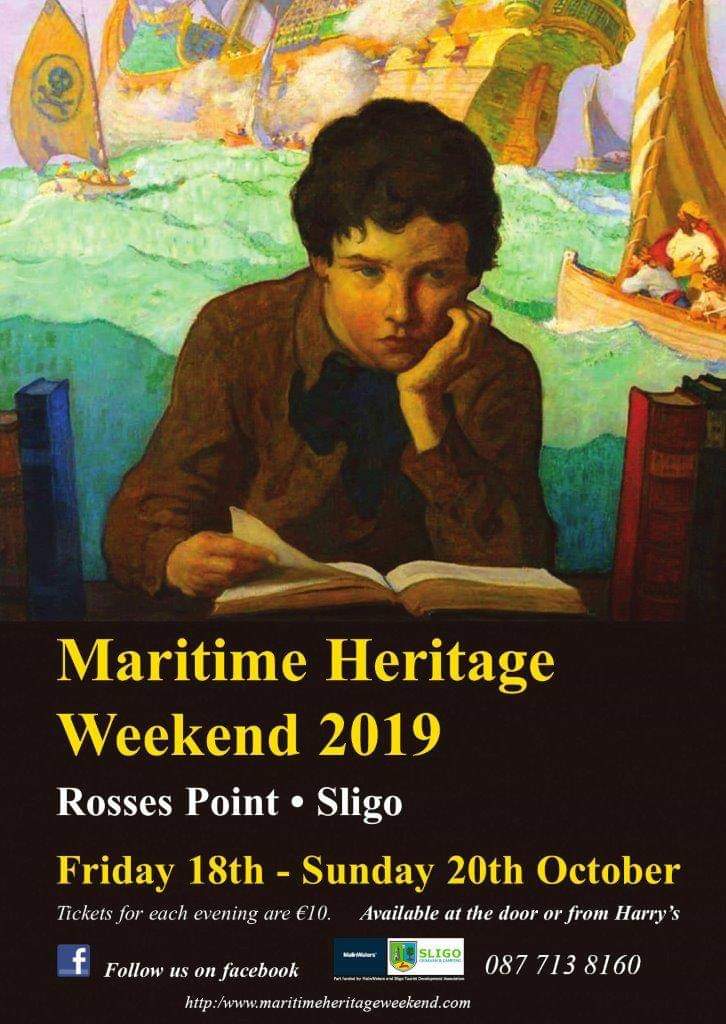 The weekend includes a production of ‘Shackleton’s Carpenter.’ Presented in co-operation with County Sligo Golf Club, the play by Gail Louw with Malcolm Rennie is 70 minutes of riveting storytelling. Shackleton’s Endurance sank in Antarctica, leaving him and his crew of 27 stranded. Harry McNish was a brilliant shipwright whose skills ensured all lives were saved after one of the most astonishing voyages in history. For all his bravery and ingenuity, McNish was one of four crew who did not receive the Polar Medal. We meet him alone and on the wharfs of Wellington, New Zealand. ‘It is a nuanced and masterful performance worthy of a Beckett play, with canny direction from the late Tony Milner’ – The Guardian

American writer, Rhode Island College professor and one of the world’s foremost experts on the Franklin saga, Russell Potter has experienced first-hand the terrain and conditions which confronted the ill-fated Franklin Arctic expedition of 1845 when 129 men and two ships disappeared without trace during a search for the North West Passage.  Potter has worked as a consultant on and appeared in the NOVA documentary ‘Arctic Passage’ and with museums in Canada, the UK, and US in connection with the international ‘Death in the Ice’ exhibition. His illustrated talk will examine aspects of the Franklin expedition, from Inuit oral history to recent underwater discoveries of the missing ships. He’ll describe what life on board was like for the dozens of men who stepped ashore in Antarctica’s Victoria Land, and for the officers and crew who, one by one, froze and starved to death in the Arctic wastes as rescue missions desperately tried to track them down.

Peter Carney has a degree in Mechanical Engineering from Liverpool University. He has a lifelong interest in archaeology and his fascination with the 1845 Franklin expedition is at the centre of a wide ranging interest in the history and technology of the Victorian era. He has authored or contributed to papers on the technical systems of Franklin’s ships and the question of lead poisoning on that expedition. He recently completed a simulation of living solely on the regulation diet of Franklin’s crewmen – he began preparing the victuals of Queen Victoria’s Royal Navy by canning his own food. (He also had to get used to drinking grog in the morning). The daily rum ration of the 1840s was near enough four 50ml doubles by today’s standards. The weekly consumption would amount to four times the current recommendation by the UK’s chief medical officer. Peter will present his original research relating to the victualing of 1845 Franklin Expedition.

Des Ekin, journalist and author of two nonfiction books about piracy in Ireland will talk about one of the most dramatic stories in Irish history – “The Sack of Baltimore”. A joint force of pirates and armed troops of the Turkish Ottoman Empire set sail from Algiers and stormed ashore at the sleepy harbour village. More than 100 villagers – mostly women and children – were borne away to a life of slavery in North Africa. Only two of them ever saw Ireland again.

Des’ bestselling account of the 1631 pirate slave raid – ‘The Stolen Village’ was shortlisted for the Argosy Irish Nonfiction Book of the Year Award and also nominated for Book of the Decade in the Bord Gáis Energy Irish Book Awards. Born in County Down, Des began his career as a reporter and rose to become Deputy Editor of the Belfast Sunday News before moving to his current home in Dublin, where he worked as a columnist and political correspondent for the Sunday World until 2012.

Designed by Limerick man Conor O’Brien and built in Baltimore in 1926, she was delivered by Munster men to the Falkland Islands where she served valiantly for seventy years. Returned to Ireland for restoration at Hegarty’s Boatyard Skibbereen, Ilen sailed in July from Limerick to West Greenland in the wake of the wild Atlantic Salmon. The venture included the participation of Limerick and West Greenland youth in the creative process of building dynamic relationships and discovering what we share as similar North Atlantic maritime island communities. Salmon’s Wake is an intergenerational and international Limerick educational and outdoor adventure programme, which is unfolding in schools, tangibly through boat building workshops, community days, river, sea and ocean voyaging, and, more diffusely, through the unseen frequencies of the digital web.

The incredible story of ‘Captain Bligh’s Perilous Voyage’ by Joe O’Farrell Joe of the Athy Heritage Centre Museum and Shackleton Autumn School is one of the highlights of this year’s event.

In 1789 having been left for dead by H.M.S. Bounty mutineers, Captain William Bligh and a handful of loyalists, starving and weak, landed at a Dutch settlement in Timor, after traveling 3,618 miles in a tiny open boat. They had been set adrift on the Pacific six weeks earlier by mutineers who took over Bligh’s ship – The Bounty.

Exposed to severe weather, starving and stuffed into a 23 foot vessel only made to accommodate 15, they drifted for weeks. Death by starvation was a constant threat. By their journey’s end Bligh and the men in his small vessel were nearly dead.

Despite extreme hardships, Captain Bligh navigated the boat safely to Timor. Although depicted as cruel, he may be one of the greatest seamen who ever lived as he navigated 3600 nautical miles to safety in 41 days using only a sextant and a pocket watch.

Russell Potter ‘The Mystery of The Franklin Expedition’

Tickets for talks Friday/Saturday nights/Sunday morning at Harrys Bar, €10 available at the door.

Tickets for Shackleton’s Carpenter €15. Seating is limited and booking is recommended.

For more information visit the https://www.facebook.com/rossespoint1