The relative of an RNLI bowman who received a gallantry award for rescuing 12 people from a fishing vessel in Galway Bay in 1938 has presented the honour to the Aran Island lifeboat crew. 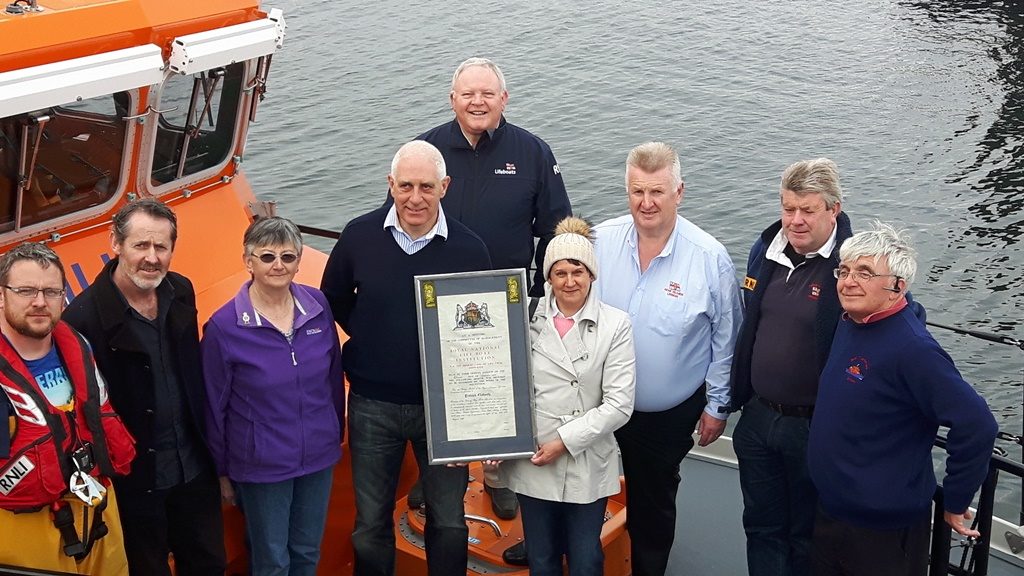 John Harwood’s grand uncle Patrick Flaherty was the bowman of the Galway Bay (now Aran Islands RNLI) motor lifeboat which was called out on the night of the 16-17 August 1938. He was subsequently awarded in recognition of his meritorious conduct when together with four other men he courageously manned a small boat and rescued the crew of 12 of the Greek steam trawler Nogi which had run aground near Straw Island Lighthouse, Aran Isles, during a strong westerly-south westerly wind with a very heavy sea. They also aided a second small fishing vessel Hatano with 4 crew on board that had got into difficulty while trying to assist the Nogi.

Flaherty and the lifeboat crew first went to the small boat, the rowlock of which caught in the fender of the lifeboat, and there was danger of a serious accident. The motor mechanic jumped aboard the boat and smashed the rowlock with a hatchet. The four men were rescued and their boat towed away.

It was impossible for the lifeboat to get alongside the Nogi but five of her crew manned the small boat; it was lowered by a rope down to the Nogi and in two journeys rescued the 11 men on board her. A member of the Nogi’s crew had been swept away in the trawler’s boat when she struck. His boots were found on an island, but it was only after eight hours’ search that the man was found dazed and exhausted. The whole rescue had taken over 14 hours.


When John’s uncle Paddy who lived in the north west of England and worked most of his life as a miner, died in 1998, he left John his father’s citation for the bronze medal which is written on vellum.

‘This always had pride of place in my uncle’s house,’ John explained, ‘and as a child he often told me the story about how his father and I think his older brother took part in the rescue. He also regaled me with tales of his life on Aran, particularly his connection with the sea. This influenced me in later life to love the sea and along with my wife I have had a 30 year passion for the sea as a diver and yachtsman.’

‘As time marches on, I realise that there will be no one to appreciate the award when my wife and I are no longer here, so I think it is high time that the award is returned to the Aran Islands where it belongs. I believe that my uncle may still have family on the Islands. I think the award should lie with them or with the lifeboat station.’

John and his wife Mary met members of both Aran Islands and Galway RNLI in Rosaveal Wednesday evening before John presented the citation on vellum to Aran Islands RNLI Coxswain John O’Donnell.

‘We are extremely touched by John and Mary’s generous gesture to place what is their precious heirloom into the care of Aran Islands lifeboat station. RNLI medals for gallantry are rare and are presented for acts of bravery and this was certainly the case on the night the lifeboat carried out the rescue of the Nogi in 1938. We are very grateful to receive this award from John and Mary and can assure them it will take pride of place in his granduncle Patrick Flaherty’s lifeboat station.’