As the weather heats up and we head to the beach the RNLI are reminding people to stay cool in the face of danger and remember to fight your instincts and float to survive if caught unexpectedly in the water.

A new study commissioned by the RNLI has revealed that over half (54%) of people studied would follow a potentially life-threatening instinct if they fell into water. The RNLI is calling on the public to fight their instincts and remember a simple skill – floating – to help save lives from drowning. 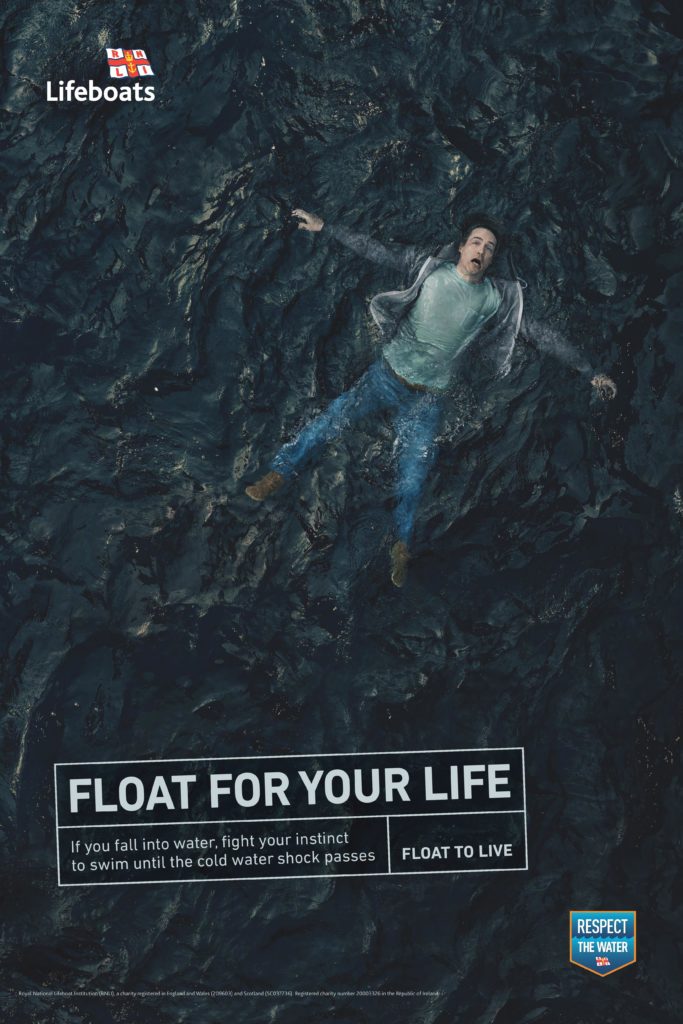 On average there are around 133 drownings in Ireland every year – that’s more than five per fortnight. Most of those people never intend to enter the water.

Sudden immersion in cold water puts these people at severe risk of suffering cold water shock, which triggers the instinctive but life-threatening reaction to gasp uncontrollably and swim hard, which can quickly lead to drowning. Research commissioned by the RNLI shows over half of the UK population would follow this potentially life-threatening instinct if they fell into water.

Respondents were asked to imagine a scenario where you have fallen unexpectedly into a body of water such as the sea, river or canal. What are the very first actions you would take to get yourself out of this situation safely?

40% of respondents said their immediate reaction would be to swim, while 2% said they would panic – two of the instinctive responses the RNLI is urging people to fight.

As the RNLI’s national drowning prevention campaign Respect the Water enters its fourth year, the charity is calling on the public to fight their instincts and remember one core survival skill – floating, until the effects of cold water shock pass and you can catch your breath, before then trying to swim to safety or call for help.

Mike Tipton, Professor of Human and Applied Physiology at the University of Portsmouth, explains: ‘We often rely on our instincts but our instinctive response to sudden immersion in cold water – gasping, thrashing and swimming hard – is potentially a killer. It increases chances of water entering your lungs, increases the strain on your heart, cools the skin further and lets air escape from any clothing, which then reduces buoyancy.

‘Although it’s counter-intuitive, the best immediate course of action in that situation is to fight your instinct and try to float, just for a short time. The effects of cold water shock will pass quite quickly, within 60–90 seconds. Floating for this short time will let you regain control of your breathing and your survival chances will greatly increase.


‘Floating is not an easy skill in cold open water but most people can float, and the air trapped in their clothes as they fall in should make it easier. As little exercise as necessary can be undertaken to help stay afloat. The recommended floating position is to lean back in the water and keep your airway clear. Keeping calm will help maintain buoyancy. Some people find it helpful to gently scull with their hands and kick their feet to keep afloat. The main principle is to do as little as possible until you have control of your breathing. At this point you have a much better chance of avoiding drowning and surviving until you can swim to safety, call for help, or continuing to float until help arrives.’

The RNLI is urging people to remember this life saving advice, share with others and practice the survival skill of floating. The RNLI rescue 1000’s of people every year but they can’t be everywhere. If people are remember to stay calm, float and regain control of their breathing, they stand a much greater chance of surviving.