The Irish coast has some pretty amazing creatures and the Puffin has to be one of the most beautiful.

The Puffin is a fantastic-looking summer visitor to our shores with striking black and white body and a wonderfully multi-coloured bill, they are really unmistakable when seen up close. But here’s the catch, if you love these little birds you should never get that close! 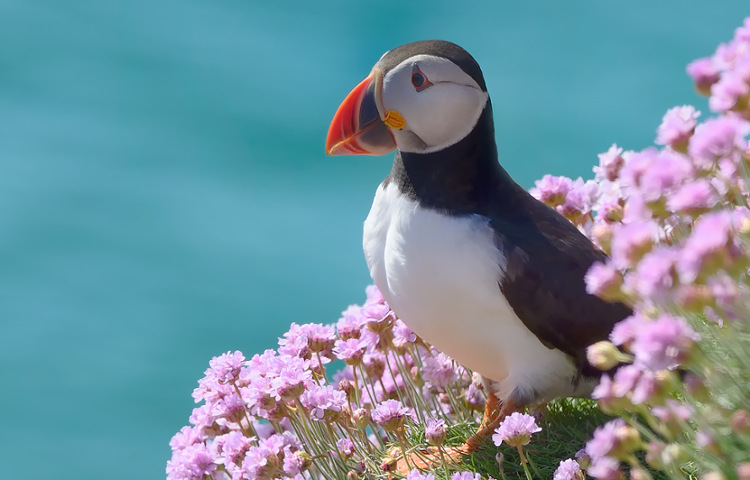 When they visit: Puffins come from March to September and stay in sea stacks and cliffs. They spend the summer months breeding and feeding their young on the rich local cuisine of sand-eel and sprat.

Where they live: Puffins are mainly found on the west coast with a scattering at east coast sites. Great Saltee is a good place to see them and the Cliffs of Moher in Clare and Horn Head in Donegal are also accessible sites. If lucky enough to be taking a trip to the Skelligs, look out for Puffin Island, close to the mainland, another excellent site.

Puffins inspired the fictional Porgs in the latest Star Wars film which was filmed on Skellig Michael last summer.

Conservation note: Puffins are experiencing an ongoing population decline in their European range. One new study has found that Irish puffin populations may be on decline because they are too tired to breed after long trips across the Atlantic. Compared to their European and American counterparts Irish puffins travel further, sometimes up to 4,700km on flights over and back across the Atlantic. These long trips really take it out of the little birds and when they return to their cliff side burrows on Skellig Michael or Rathlin Island the birds only lay one egg and feed one chick. All their energy goes into restoring their own health and recovering from their journeys.

Other significant factors, including human disturbance, have also impacted Irish puffins. And this is where we can make a difference.

What can we do: For sure we can’t change the distance these incredible birds migrate but when they visit Ireland we can have to respect their space and not intrude upon their nesting areas. If we want to see these birds continue to share our islands, we need to keep our distance!