The latest in our series of maritime inspired poems by Daniel Wade. Everyone knows the story of the Titanic and her ultimate demise, but this poem focuses on the MV Reina del Pacifico, one of the lesser-known vessels to have emerged from the shipyards of Harland & Wolff. The ship proved to be as ill-starred as her White Star Line predecessor when four outer crankcase motors exploded in her engine room during sea trials, killing 28 of her crew and injuring sixty others on the September 11th 1947. 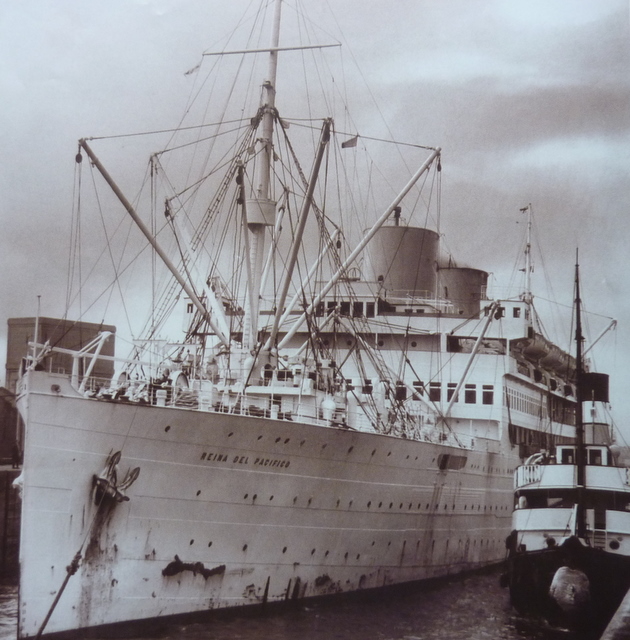 Like a beast’s airless belly, the Reina’s charred stokehold,
a heat-slurred pyre weaving oil-mist to lagan –
one more fraught ship of a fraught state.
Her gutted crankshafts boom in sight and mind
scattering like motorized fanfare
all the way across the North Channel to Harland’s.

The native gantries, poised as if forever
above Belfast’s graving docks, stand quiet as a tug
eases her upriver, a day after the fact. On slipway
and wharf, yardmen pause at their work,
doffing dunchers in sober respect
for the newly dead and their ill-starred liner;
silence briefly rules the deafening shipyard.

The war ended two years ago. Union flags fly
at dutiful half-mast, drum and fife bang to tribal tempos,
a sash of loyal flame fastens the city in two.
Lives are ruled by iron, the discordant opera of hammer
banging off plate, crane sirens blaring on the Lough.
In that Mecca of smoker’s cough and craftsmanship,
1, 742 sturdy keels are laid all under
the foreman’s scowl, and a shared Woodbine.

Work snowballs. Vessels that saw service in war
return to their old functions, troopships converted
back to liners, as if trauma can be so easily shaken off
by a metal refit. Mild September: that it’s a day
eminently suitable for sea trials cannot be contested.
Once more, Reina del Pacifico, aged but still
with plenty of horsepower left in her, will ferry
tourists to Latin America by way of Merseyside,

authorized for a full capacity of 886 passengers,
powered on hydrocarbons.
A floating shit-heap
in her war years, she’s a great white titan again,
one of Belfast’s proudest. Deep-water oblivion
and failure in the bearings cross only the minds
of naysayers.
Yet, in sight of the shore, roughly seven miles off
Copeland, raven-black smog gusts from her rear funnel.
Overheating in her crank chamber has caused all four
engines to explode, killing twenty-eight of her crew.
Truly a perilous line of work to be in, not a vocation.
The accident seemed – and it is no exaggeration
Of language – just impossible, but it happened.*

Measuring her miles in the Firth of Clyde
away from the torrid sea –
full ahead, dead slow, half astern, stop.
After today, she’ll be labled a “hoodoo ship” –
a vessel with bad luck riveted into her inboard,
her name a cautionary tale for marine engineers.

The escape hatch gapes, open as a secret:
her engine room’s mined penetralia is more sewer
than the motor auxiliary of a working ship, and a soon-
to-be luxury liner at that. A half-lit trove of arithmetical
valves, control levers and shafts, where men are gathered,
caked in dust, boosted on stale, whiskey-laced coffee…
doing what, exactly?

Talking football, or shop? Slagging each other off
or else getting to it? Grumbling a work-song
in flat unison, sweat oozing steadily on each brow
as they brake the propeller shaft?

Brothers, boyfriends, husbands, sons, sons-in-law,
fitters, draughtsman, engineers, superintendents,
chancers, drinkers, card players, amateur footballers –
soon-to-be-corpses –
each with a bone in his teeth for the job ahead.
The motor thrums metrically above them. Shovels blunt
and the fire room is seldom breached by daylight,
only the pistons’ fiendish glow for visibility –
panelboards wire a crackly

transmission of hazard and hard labour, reeking
of diesel and atomised air. It comes without warning.

A roar of glass shatters the routine, louder than the crunch
of a rudder touching the water for the first time.
The men feel only the oil’s toxic blast gorging
on their jaws and sinews, flames dancing like locusts
over heavy boiler suits, the smoke’s acrid perfume
swirling to their lungs, drowning screams in black
overkill, its full thickness singeing them to cadavers.
One writhes through the doorway of the water room
like an effigy made sentient, his body engulfed,
embers licking at his sleeve and eye, and another
is crushed under a buckled stairwell, his wheezes stifled.

Some die instantly, while others have five more days
to go before succumbing to their blisters. The rest
lie choked and stewed beneath burst pipes and lumps
of steel in the flammable slurry, luminous spurts
of arcing from where a light exploded in its fixture.
Oil gushes contentedly as blood or mercy.
They can wait only for rescue or death now.

In Belfast, ghosts shuffle among dockside sheds
toward the Queen’s Island, nurtured
from briny slag and sediment
beyond steel plating, beyond ice-clause.
Oily soot-stains on the funnel are the sole proof
of an explosion ever taking place
aboard the Reina del Pacifico.
Work, wages, shipboard politics, all up in smoke.
A cigarette case,
stamped with the ship’s name and image,
is dropped over the side
and down below, the engine room seethes
like the belly of a whale
wherein a man may find himself swallowed.
The ghosts loiter in the fog.
Freshly-cut flames ripple to their cores.

*Verdict given by Dr. H.P. Lowe, Belfast Coroner and chief identifier of the men killed in the Reina explosion.