The Second World War was a time of great suffering but even in war the business of everyday living doesn’t grind to a halt. Life continues, trade goes on, just severely hampered by the harsh new realities. And perilous situations were never far away for those who braved the seas, even for the those without a dog in the fight, like the MV Kerlogue, a neutral ship transporting cargo as decidedly innocuous as oranges. 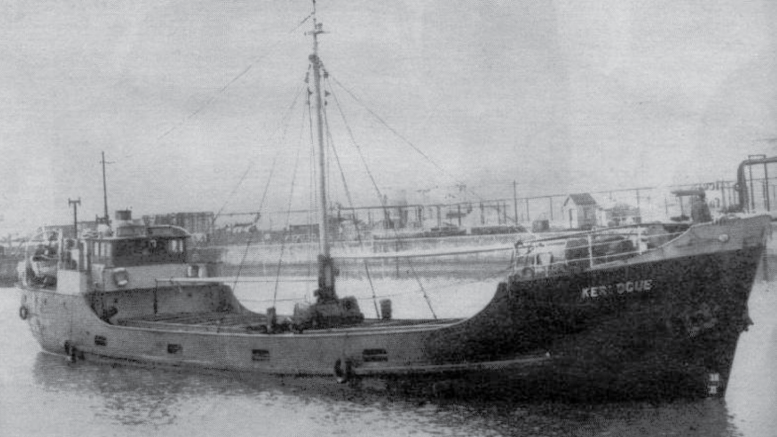 Ireland’s transport infrastructure was still in bad shape following the civil war and at the outbreak of the Second World War coastal routes were often the fastest way to trade goods around the island. The boats that carried out this trade were shallow-hulled ships appropriately known as ‘Coasters’, nimble enough to venture along Ireland’s geographically complex coast. The MV Kerlogue was one such ship and one that would experience a full range of wartime activity.

Built in Rotterdam and launched in 1938, she was owned by the Wexford Steamship Company. She was a small ship, 43 metres long, 335 tonnes and crewed by 11 men. As an Irish vessel she was neutral and as the clashing navies roamed the seas, she was wisely marked in large letters ‘EIRE’, leaving little doubt as to her affiliation. This still didn’t prevent her from being attacked by both sides during the war, once by a German sea mine, another time by a British plane.  But she survived both assaults and carried on her transport duties. 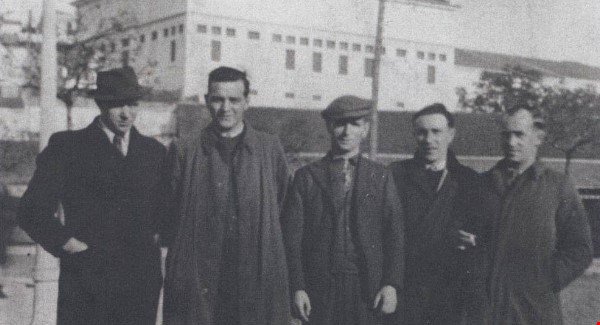 With the outbreak of the war there were less British ships taking outbound cargo, Ireland’s exports typically going out via British flagged vessels. But this was compromised as more vessels were requisitioned for the British war effort. The MV Kerlogue was increasingly required to do a lot of work she wasn’t designed for, venture out far further than the coast, her shallow hull not suited for the harsher conditions of the open seas. And it was on one of these dangerous deeper sea assignments that she would make her greatest rescue and became the saviour to 168 Germans.

On the 29th December 1943, the Kerlogue had left Lisbon and was 360 miles south of Fastnet Rock on passage to Cork. In the skies above a German reconnaissance aircraft appeared and signaled SOS by dropping flares on its starboard side to alert it to the carnage nearby, then proceeding South West. The MV Kerlogue bravely followed, sailing into an unknown situation and at great risk. 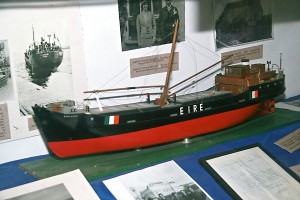 Arriving at the scene, the Kerlogue was greeted by a harrowing sight. A German Narvik-class destroyer Z27 and two Elbing class torpedo boats, T25 and T26 had been sunk. The bodies of men filled the sea, some were still alive. The cruisers HMS Glasgow and Enterprise had sunk the ships while themselves being safely outside their enemies 10 mile range of fire. 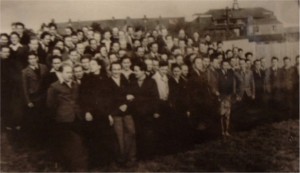 The Internees At the Curragh for the rest of the war

The Kerlogue rescued as many as it could, 168 were plucked out of the water. The cargo of oranges transforming into life saving nourishment for the rescued and severely dehydrated Germans. After the rescue Captain Donohoue would ignore requests from the Germans to bring them to France and from the British to go to Fishguard. Instead they went to Cobh, landing on the 1st January 1944. The Germans remained at the Curragh internment camp until the war was over.

Years after the event Lt.-Commander Jaochim Quedenfelt, the highest-ranking German rescued, would recount ‘the little ship bravely moving through the enormous waves to pick up more and more of my comrades.’ A vivid testament to the MV Kerlogue, the little coaster stuck in the middle of someone else’s war, that would, over the course of the war, prove to be a friend to both sides in their time of need.