This poem recalls the tragedy that saw nine crewmen of the Fethard on Sea Helen Blake Lifeboat lose their lives while trying to rescue the crew of the Mexico that had gone aground at the treacherous Keeragh Islands near Fethard on February 1914. 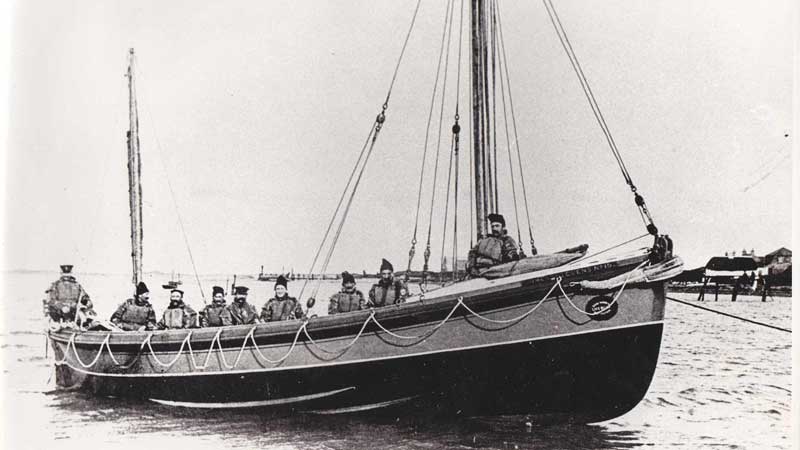 The Helen Blake and Crew

NAME OF VESSEL: The Helen Blake

MEANS OF PROPULSION: Oar-based, as well as yoke and tiller.

PREVIOUS LAUNCHES OF SERVICE: rescue of the crew of the ketch

assistance to the barquentine Skok in heavy seas, February 17th,

1912, which ultimately proved needless due to improved weather

conditions. Her crew are reported to have acted professionally and

capably in both incidents.

were the reports of their rescue.

There is no vocation more

solemn or necessary than

How many storms go unrecorded

by the families of men lost to them?

Who here has been promised

a hurricane when they sleep?

to novices and your words

hit only ears of flint

with each devilish detail,

but let it be known

is a fathomless trial for anyone,

official or volunteer, to face down.

The blood of stricken crewmen

now lick the shores at Cullenstown.

A year later their names are spoken

during a Mass of Remembrance,

hanging anvil-heavy in the ears

of neighbour, wife, and widow.

Nine drowned names will be chiselled

into cenotaphs of alabaster,

white as the waves that stove them,

stitched into garlands placed on soil,

onto All Ireland Medals conferred

by the GAA, and a diploma

of courage from the King of Norway.

All the mangled lifejackets,

the lodged helm, the adrift buoy:

none were tendered as keepsakes.

Grant them all mercy.

than a portside lantern

and now, after the sun’s decay,

clouds rolled too heavy for hope

as the old schooner Mexico

staggered in from Laguna Port

to sink off Fethard Bay

at the Keeragh’s barren feet.

There are nights when the tide

is a grey mirror, ripples throbbing

But the night of rescue

was a raven-black freeze,

the Celtic Sea dancing too

wildly and too harsh, a sleety dream,

curtains of rain drawn over the Saltees

where trawlers gather to worship.

The alt juts out into the waves, burying

the grassier stem of land with its bloated

to pulsing voids, rowing the lifeboat

from Fethard through salt-dimmed air

to the unaided ship and the rocks,

each man a spray-blind apostle

of rescue, the entrails of the ocean

ripped out by their whetted skeg.

to a jagged sliver. Every wind-twisted face

scowls, all oars out and dipping

to windward, but all this time, she’s taking on

more water. If the keel’s spine is to break,

then it is to break completely,

Then, an unholy trinity of waves crumble

against the reef and smashing her to flotsam,

her gunwale salted by white geysers

of surf. No radar, no map, no compass’s

hunker on the reef with the ship’s crew,

shivering down to the cold planetary zone.

By then, nothing – a lantern’s swaying glow,

a voice calling out familiar names,

even the rain’s allaying ebb – could have

gladdened them. Nightlong and daylong, all along

in curved aggression until a working passage

is made to deliver them or light finally spills

over the black islet. What to do, then,

with a body snuffed by hypothermia, but wrap

it in sailcloth, and anchor it with turf-sods?

Terns gloat over the charms of wreckage.

The sky is taut as a membrane, the ocean

still starved for wrecks. What to say of that night

afloat and their memory moored in the bare

acropolis of dead-eye. Offer, if you can,

a common requiem for so many drowned.

What you need to know about the Celtic Sea,

Hemmed in on both sides by Hibernia and Albany,

Is that it’s fit to burst. Drownings are expected

And certain out there as the dawn. Rejected,

Dim, clouds unravel to sky-smoke in a cool breeze,

And coil, rain throbs on bulwark and tiller, shingling

The sand. To see the horizon withering and mingling

Would daunt both chief inspector and harbourmaster,

However numbed by such reports of disaster.