Dr Gerard McCarthy with Dr Peter Heffernan and Minister Michael Creed. Picture Credit Darragh Kane.Minister for Agriculture, Food and the Marine, Minister Creed T.D. has welcomed the announcement of €2 million in funding from the Marine Institute and the European Regional Development Fund for a major project on Atlantic climate change led by Dr Gerard McCarthy of the ICARUS Climate Research Centre and Department of Geography at Maynooth University. 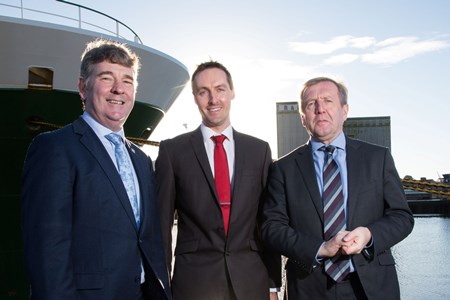 Guided by the goals of the Government’s national marine strategy ‘Harnessing Our Ocean Wealth’ and the ‘National Marine Research and Innovation Strategy 2017 – 2021’, the international ‘A4 Project’ marks a substantial investment by the Marine Institute in physical oceanography and climate change research in Ireland, and aims to improve the understanding of the links between trends in Atlantic temperatures and climate change.

Minister Creed stated: “This funding being provided will enable Maynooth University to increase the research capacity to broaden Ireland’s knowledge at a societal level, to better understand the ocean and climate change. The research will contribute to national climate adaptation as well as international climate policy, supporting enhanced forecasting capabilities and contributing to adaptation and mitigation strategies and actions. The project is an important element underpinning implementation of the Marine Institute’s Strategic Plan 2018-2022 ‘Building Ocean Knowledge, Delivering Ocean Services’, the strategy aims to provide world-leading regional and localised forecasting outputs and services that support Ireland’s challenge in responding to changes in our ocean and climate.”

Commenting on the Minister’s announcement, Dr McCarthy said: “Over the next five years, this project will target three areas in which substantial progress can be made including: ongoing Atlantic change, sea level rise, and decadal climate prediction. As a small island on the edge of a large ocean, Atlantic changes impact Ireland more than any other country. When record global surface temperatures were reached in 2015, Ireland had below average temperatures due to a cool Atlantic. The reasons why Irish temperatures bucked the trend in 2015 requires a better understanding of Ireland’s place in a changing climate, and for this, we need to understand the changing Atlantic. This important project, which I am delighted to be leading, will greatly assist in our overall understanding of this complex and fascinating area. The Atlantic’s future will differ from the rest of the world in response to a changing climate. This is primarily because the Gulf Stream system of currents, which gives Ireland its mild climate, is predicted to weaken. The time is ripe to build upon the observations of Ireland’s ocean made by the Marine Institute over the past decades to understand Ireland’s place on the edge of the changing Atlantic.”

Professor Ray O’Neill, Vice President for Innovation at Maynooth University, said: “This major funding award reflects the global significance of the climate science research being undertaken at the ICARUS Climate Research Centre at Maynooth University. Enabled by this funding, Gerard McCarthy’s expertise, and that of his national and international partners, will significantly advance understanding of how Ireland and the Atlantic region more broadly will be affected by climate change in the years ahead.”

Dr Peter Heffernan, CEO of the Marine Institute congratulated Dr McCarthy and his team at Maynooth University on their funding award stating that, “with climate change being one of the greatest challenges facing nations worldwide, we are reliant on the best available science and knowledge in informing decisions made now and in the future. Ireland’s vast marine territory requires a cohort of researchers and scientific staff who have the resources and expertise to help further build Ireland’s capacity in physical oceanography and ocean climate science research”.

The project team will use advanced geological techniques to reconstruct Ireland’s sea level, and combine these estimates with the modern National Tide Gauge Network managed by the Marine Institute, to better understand how sea levels have been changing around Ireland and the edges of the Atlantic.

The A4 project will bring the field of ‘decadal climate prediction’ to Ireland. This emerging field will lead to improved estimates of the future climate over the period of a decade by using the predictability of the ocean.

A recent report by the Intergovernmental Panel for Climate Change on the dangers of 1.5ºC warming highlighted many risks including that of sea level rise. Dr McCarthy concluded: “Every nation needs to understand its own vulnerabilities to sea level rise as the effects are not the same everywhere.”