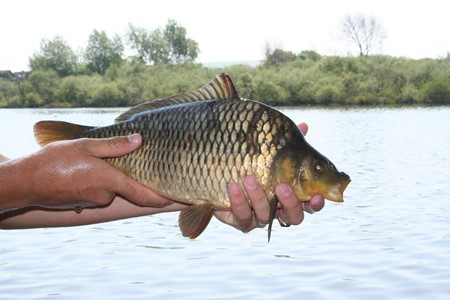 The Marine Institute received a sample of five moribund carp from The Lough on the 4th May and four moribund carp from Belvelly Lake on the 8th May. Scientists at the Fish Health Unit took samples from all fish for virological, bacteriological, histological and molecular analyses. To date, all fish sampled tested positive for carp edema virus (CEV), however further testing on the CEV positive samples is currently in progress. This includes sequencing of the viral DNA to confirm its’ identity, and until such time as this is confirmed the finding is regarded as preliminary.

Molecular tests for Koi Herpesvirus Disease (KHV), a listed disease under European Fish Health legislation, were negative for all fish sampled. Additional molecular tests for cyprinid herpesvirus (other than KHV) are also in progress.
The gills and skin of the sampled fish revealed an extremely high infestation of trichodinid parasites along with a fungal infection. White spots on the scales were also microscopically examined but there was no evidence of Ichthyophthirius multifilius infection.

Virological screening for Spring Viraemia of Carp is still ongoing with no virus observed to date. Bacteriological tests have revealed no growth of bacteria.A trichodinid parasite from the skin of a carp. Photo by Michelle Geary.

“While we’ve identified the presence of CEV (known to cause koi sleepy disease) in all the samples tested to date at the Marine Institute, we are still carrying out further tests for confirmation of the cause of the carp mortalities at The Lough and Belvelly lake,” explained Dr. Neil Ruane, from the Marine Institute’s Fish Health Unit.

Dr. Jeff Fisher, Director of Marine Environment and Food Safety Service at the Marine Institute added, “Though the ultimate cause of the introduction of the disease agent into the loughs cannot be determined from current information, the loss of significant numbers of carp in these two lakes highlights the need for vigilance among anglers and other recreational users of Irish waters in the cleaning of their equipment and gear thoroughly after use, and also for the need for fishery owners and members of the public to be aware of the potential risk of transferring fish that may carry disease into the wild, and to never release ornamental fish into lakes or rivers.”

“We’re continuing to work closely with Inland Fisheries Ireland and Cork City Council, and the Cork Carp Anglers Club to determine the cause of this fish kill, contain the incident, and identify appropriate biosecurity measures for the future.”

The Marine Institute is the National Reference Laboratory for finfish diseases and the Competent Authority for Fish Health Regulations.