Yes, history can be cruel. The ingenuity of mankind has sprung forth marvels through the ages that have elevated us as a species and broadened our capabilities and imaginations. So when a great wonder is lost to the mists of time, the human experience as a whole is lessened.

This is about one such loss. On Inishturk, they called it ‘Bier Lochlannach’. 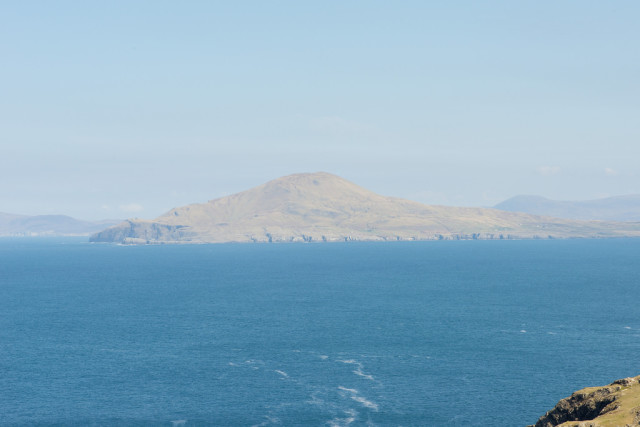 The story goes there were Danish Pirates who used the Dun at Portdoon on Inishturk to hide their boats and their bounty.  And with them alone lay the recipe for Bier lochlannach, a priceless and highly spirituous beverage made from the heather-bloom.

One day,  the pirate base was attacked and taken by the Irish who did away with the inmates except for one Dane pirate and his son.  The attackers offered to spare the captives if they told the secret of the highly prized drink.

The old pirate,  fearing the boy might be  tortured into betrayal, said he would tell if his son was put to death first, so none of his kin might see his treachery. But with this done, the pirate captain tore himself from his captors, and ran, shouting insults, to the deep chasm, springing over the cliff and carrying his secret to the grave.

A place not to be missed

Fortunately for the inhabitants of Inishturk and the visitors that venture there every year, the island has a ridiculous beauty that makes up for this loss.  It’s difficult to describe in words the effects of spending a few days here, but for sure restorative and relaxing would be amongst them and the pirates themselves would probably have said ‘Yaaaaaar’.

Ireland is happily burdened with a treasure trove of unique Islands along the West coast, so much so that the average tourist has to be quite judicious in choosing where to visit if only here for a paltry two weeks.  Aside from not going wrong with any choice made from Valentia to Arranmore, after my visit this Summer I’d certainly recommend Inishturk.

Oh, and not to worry about the lost ‘Bier Lochlannach’, the Island’s bar stocks plenty of others to try and you don’t have to rely on pirates to brew it either.