A new survey sampling Nephrops larvae from the area west of the Aran Islands will be conducted for the first time aboard the RV Celtic Voyager over the next two weeks.

“Nephrops are more commonly known as Dublin Bay Prawn, Norway lobster or scampi,” said chief scientist Ryan McGeady “and are the most valuable demersal fishery in Ireland. The value of Nephrops of landings by Irish vessels was 60 million, the stocks around Ireland that the Marine Institute assess with the Underwater TV surveys is more than 100 million,” 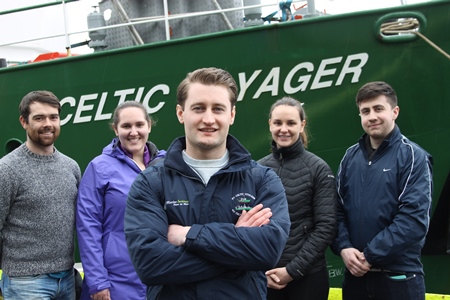 Nephrops are widely distributed in Irish waters, found in the Irish Sea, the Celtic Sea and off the West Coast of Ireland. They spend a great deal of time in their burrows found in areas of muddy sediment at the bottom of the ocean only coming out for food or mating purposes. Unlike fish, Nephrops cannot be aged directly. Coupled with their complex biology and behaviour, stock assessment of Nephrops is notoriously difficult to assess.

Since 2002 the Marine Institute has been using underwater television surveys to independently estimate abundance, distribution and stock sizes on the Aran Grounds, Western Irish Sea and the Celtic Sea. However, the primary focus of this survey is to collect data on the distribution of Nephrops larvae from two commercially important grounds including off the West Coast and the Irish Sea. “The importance of this survey is that it is multi-disciplinary which allows us to use both oceanographic data and biological sampling to increase our knowledge on what influences larval distribution and retention on mud patches where the species lives,” Dr Colm Lordan, of the Marine Institute said.

The data collected will be used to improve the accuracy of computer models that simulate the movement of Nephrop larvae in the ocean. The information gathered during the survey will also be used to validate or “ground-truth” the model to ensure its accuracy. “It is hoped that an improved model can be used to estimate the proportion of larvae surviving to adulthood each year. This will make it easier to estimate the health of the stock,” said Dr Anne Marie Power, NUIGalway.