From humble beginnings to the first commodore of the American Navy, Wexford native John Barry’s life is one of incredible maritime inspiration.

His fondness and appreciation for the sea gained in Ireland would see him climb steadily through the ranks of America’s sea-going forces to become a commodore and earn the title ‘Father of the American Navy’. 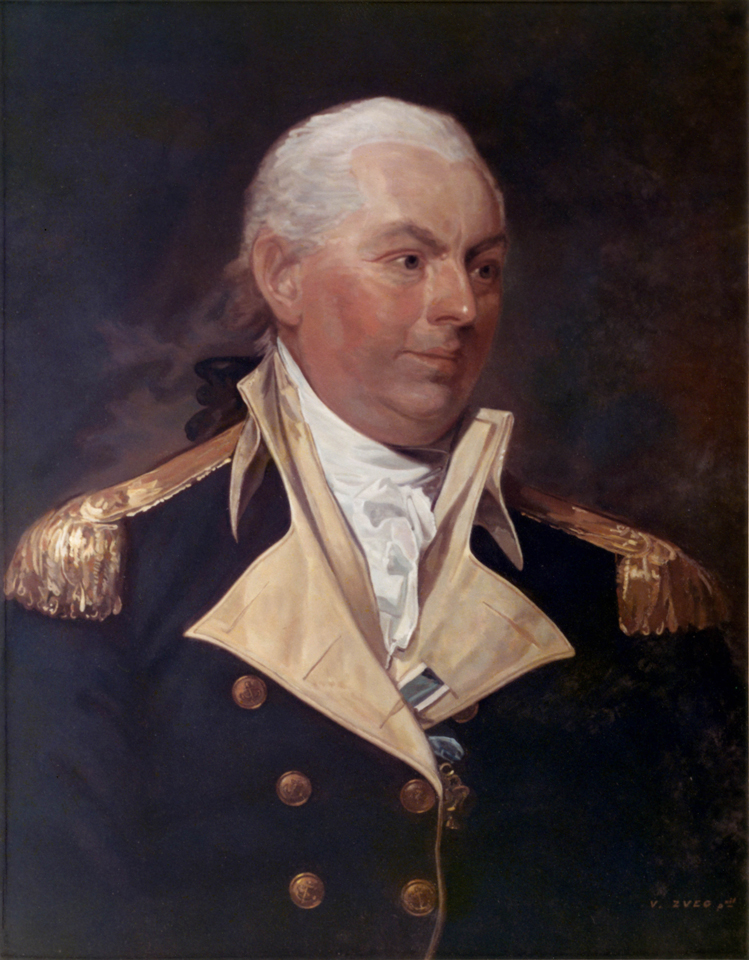 John Barry was born 25th March 1745 in the small village of Tacumshane Co. Wexford. His family were poor tenant farmers and when John was still young they were evicted from their home and forced to move to the harbour town of Rosslare.

It was here John grew to love the sea. His uncle Nicolas Barry was a captain of a fishing boat and he taught the young boy everything he knew about seafaring. He would regularly accompany his uncle on his boat learning the trade and the ways of the sea. At 16 he had decided that he would dedicate his life to the sea; this was when he emigrated to Philadelphia. He began working his way up through the ranks; from lowly cabin boy all the way to captain. 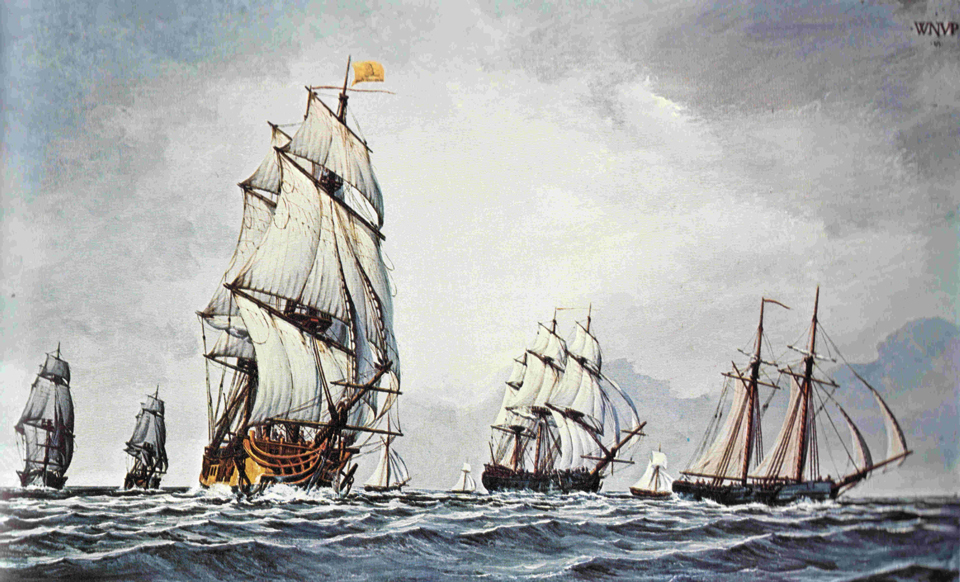 Barry was working as a captain for merchant ships when the Revolutionary War (1775–1783) broke out. He had no love for the English, his family having been kicked out of their home by an English landlord, and he wanted to help his adopted country fight back against this hostile enemy. So he volunteered to fight and was put to work outfitting merchant vessels into the first Continental Navy ships.

He was 30 when he received his first captain’s commission in the Continental Navy (14th March 1776), signed by John Hancock, president of the Continental Congress. Through his naval career he commanded several ships including the Delaware, Lexington, Raleigh and Alliance. His career is marked by many great successes and his contribution to the war was unparalleled. He was the first to capture a British war vessel on high seas, stopped three mutinies, captured over 20 ships and won the last sea battle of the American Revolution off the coast of Cape Canaveral in 1783 aboard the Alliance.

He also had time to write an important and influential Signal Book that set out a set of signals to be used for communicating between ships at sea. 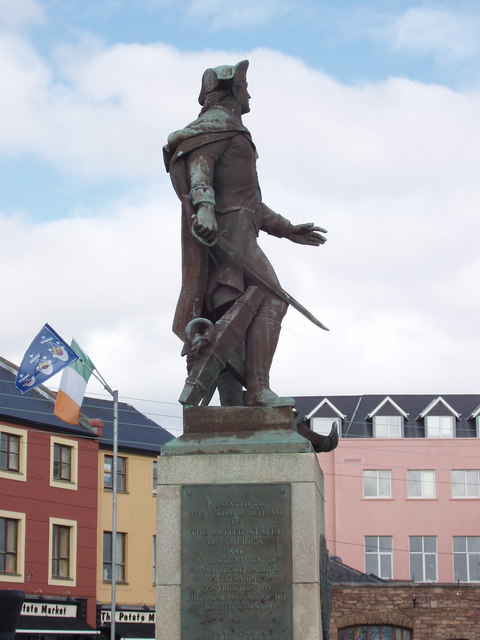 On the 22nd of February 1797, President George Washington made him Commission Number 1, and from then on his title was ‘commodore’. For his gallantry, exceptional nautical skill and daring he became known by his contemporaries, who were in the best position to judge, as the ‘father of the American Navy’. Not only was he the first commissioned naval officer but also its first flag officer.


Up until his death he worked on developing the finest most powerful naval force that could defend and protect his beloved United States. He trained many of the top officers and naval heroes of the time and under his direction the great frigates of the US were built. 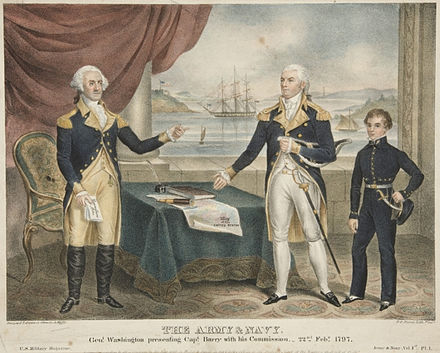 After a life of danger and adventure on the seas he died on the 13th September 1803 in his country home in Strawberry Hill near Philadelphia. He received a full military burial and was interred in Old St. Mary’s Churchyard, Philadelphia.

The epitaph on his tomb reads:

‘Let the Christian, Patriot and Soldier
Who visits these mansions of the dead
View this monument with respect.
Beneath it are interred the remains of
COMMODORE JOHN BARRY
Father of the American Navy.
He was born in the County Wexford in Ireland
But America was the object of his patriotism
And the theatre of his usefulness.’ 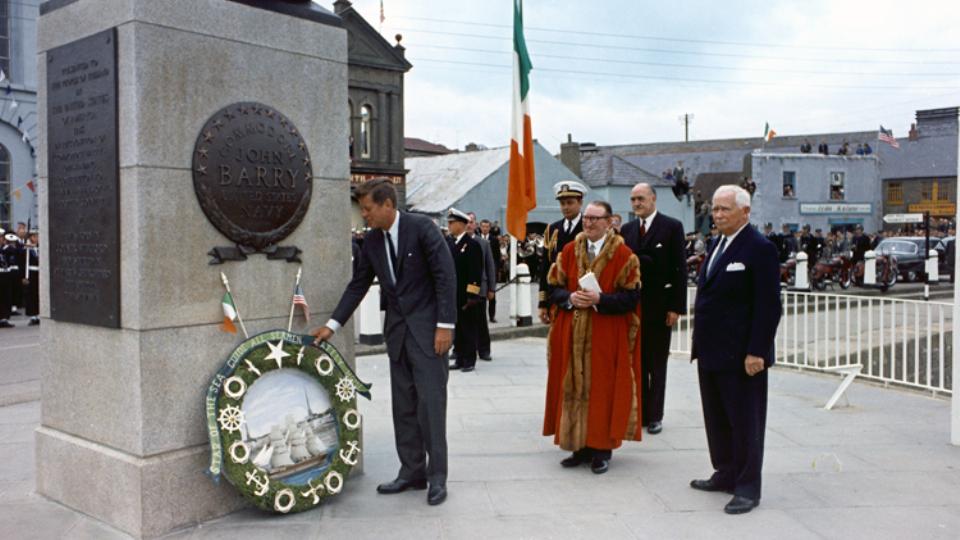 John F Kennedy lays a wreath at the statue of John Barry in Wexford, 1963.

His memory lives on in numerous plaques and statues erected in his honour. One statue is in his home county overlooking Crescent Quay in Wexford town. It was gift given to the town by the people of the United States and unveiled in 1956. Each year the town honours this great man with a wreath laying ceremony at the statue and a parade. An annual maritime festival was also started to remember him and the rich maritime heritage of the town. 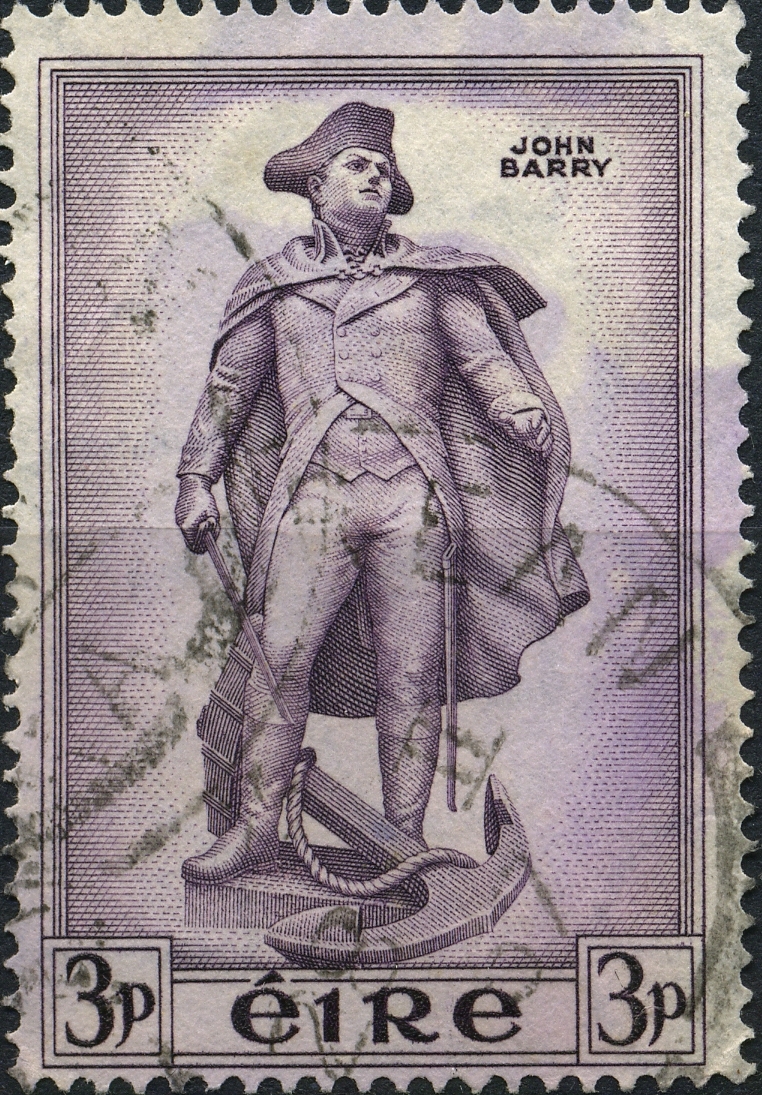 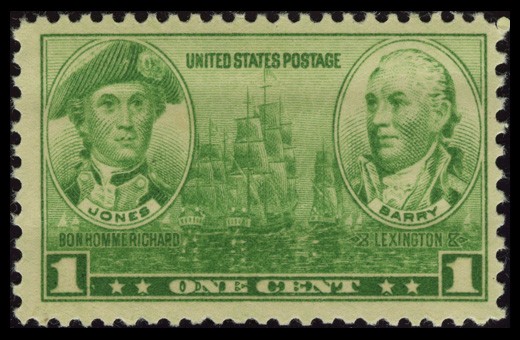 Barry and Jones Both often cited as the Fathers of the US Navy. Issued 1936

There are two more statues of Barry – one at the entrance to Independence Hall in Philadelphia and another at Franklin Square Washington, D.C. 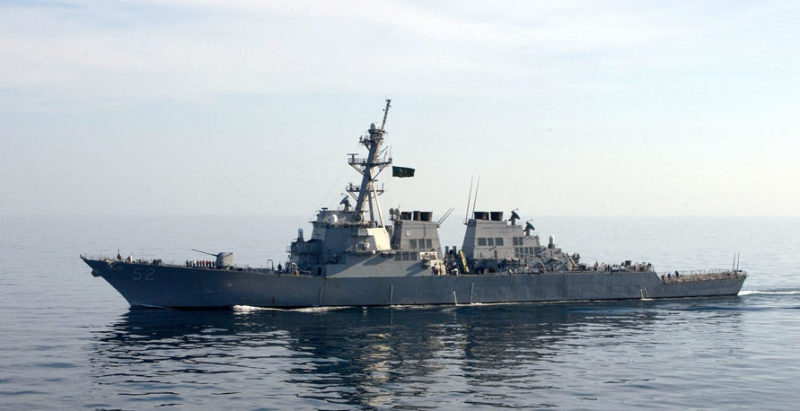 Other significant marks of remembrance include the naming of four US Navy ships in his honour including the USS Barry (DDG-52) which is currently in operation.