The Inishowen Maritime Museum in Donegal has long been on Coast Monkey’s bucket list, and with its fascinating maritime displays and exhibits, it really did not disappoint! 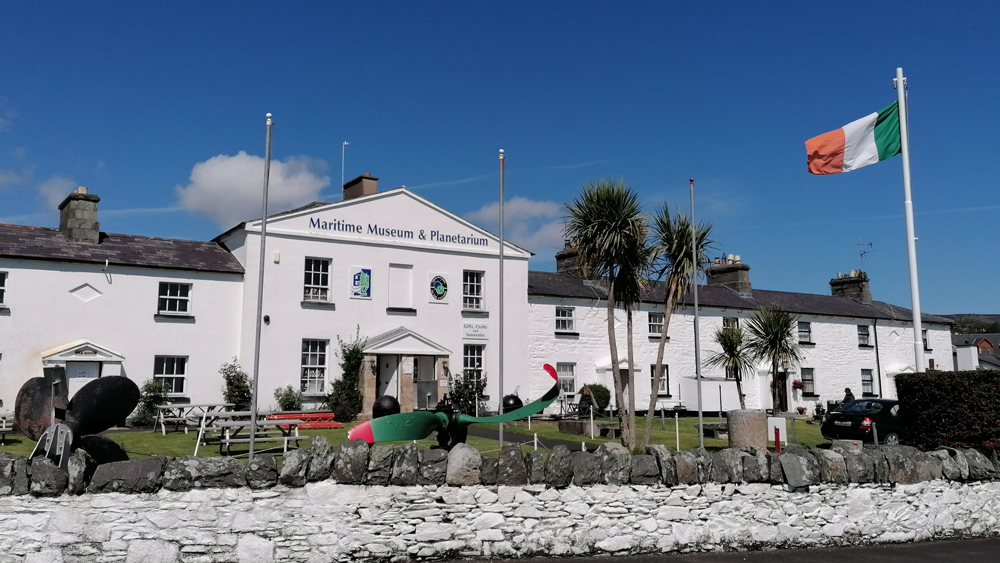 Located at Ireland’s most north-westerly point, Donegal is famous for its dramatic coastlines and its close relationship with the tumultuous waters of the Atlantic Ocean, so no better place to learn more about this than the Inishowen Maritime Museum & Planetarium.

The museum and planetarium is ideally located in the old coastguard station overlooking Greencastle harbour on the banks of Lough Foyle. 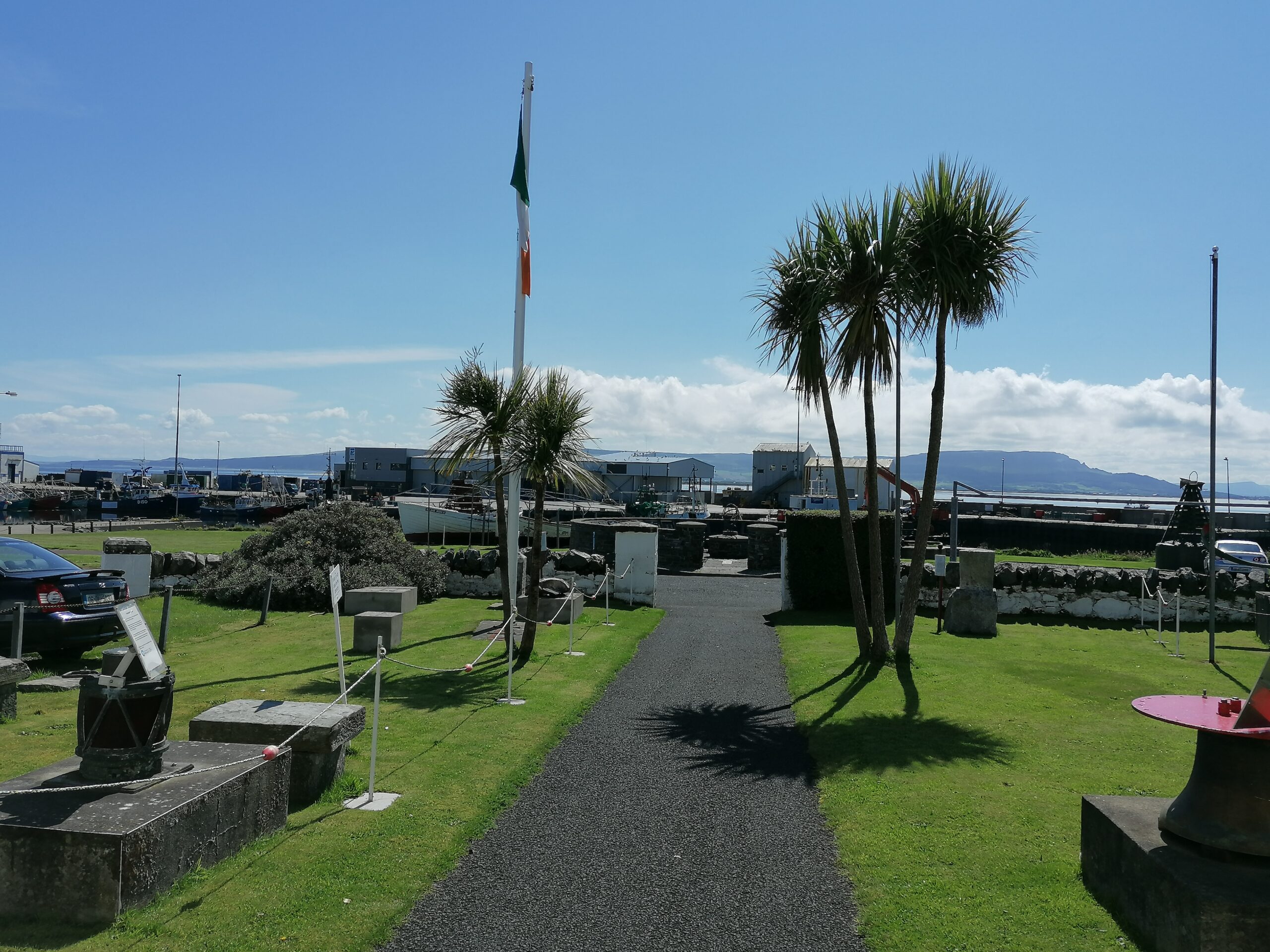 Fantastic views Greencastle Harbour from the entrance of the Museum

On display on the grounds are a range of buoys, beacons and anchors.

Inside, the museum houses an extensive collection of maritime memorabilia, artefacts, models, equipment and exhibitions on a whole range of topics including shipwrecks, the coast guard, traditional boats, signal towers, naval ships, lighthouse and much more. 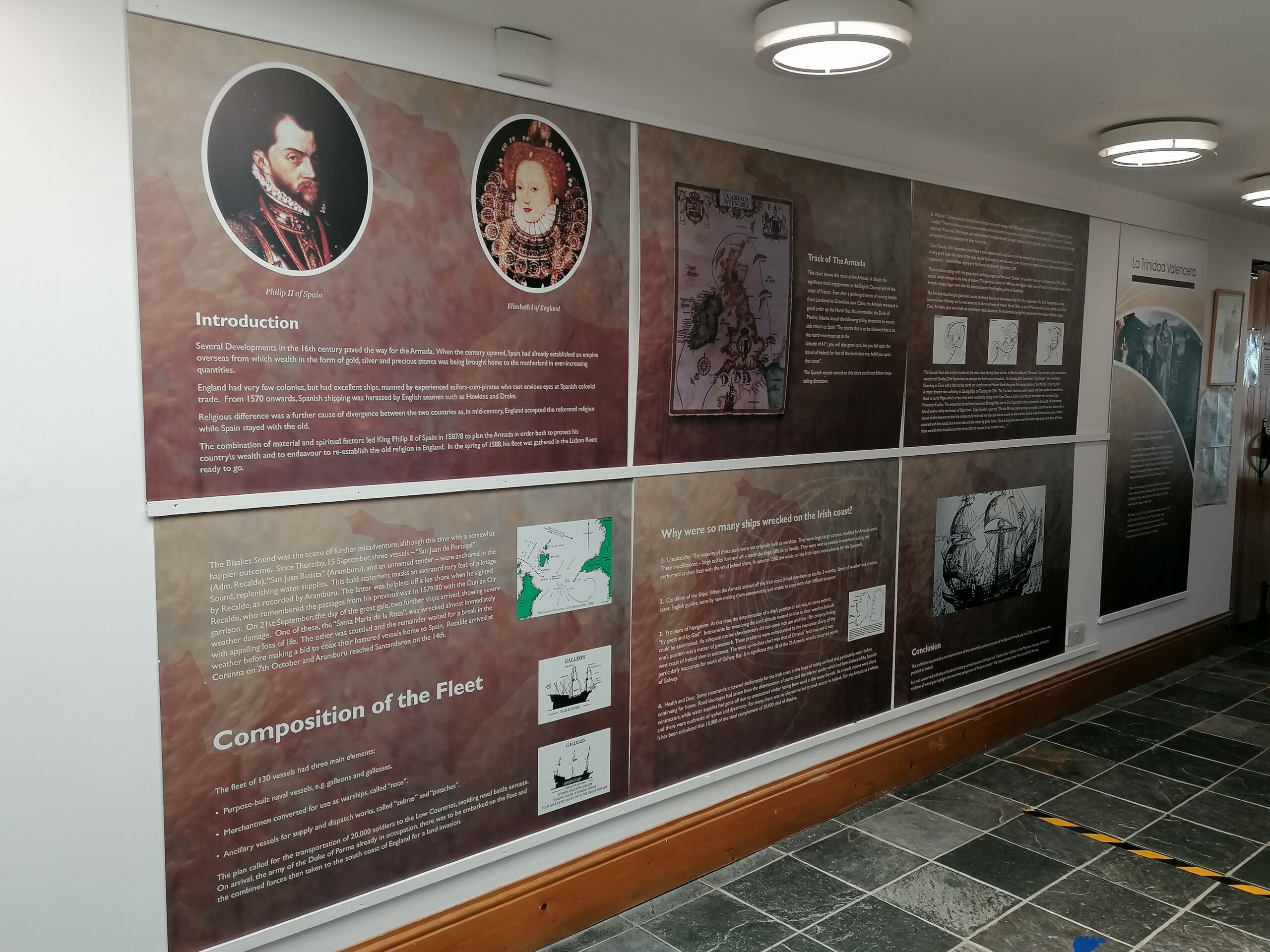 There’s a fascinating display on the La Trinidad Valencera, the fourth largest ship in the Spanish Armada, that sank in Kinnagoe Bay in 1588. The majority of the crew managed to get ashore before the ship sank, aided by the local O’Doherty clan. 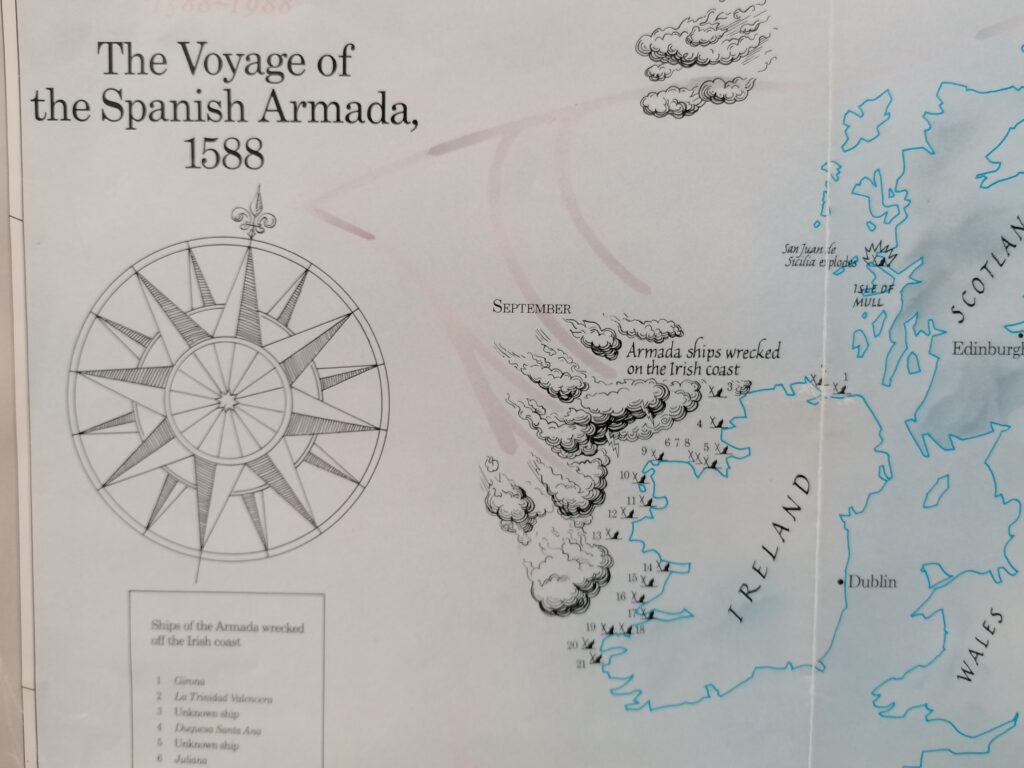 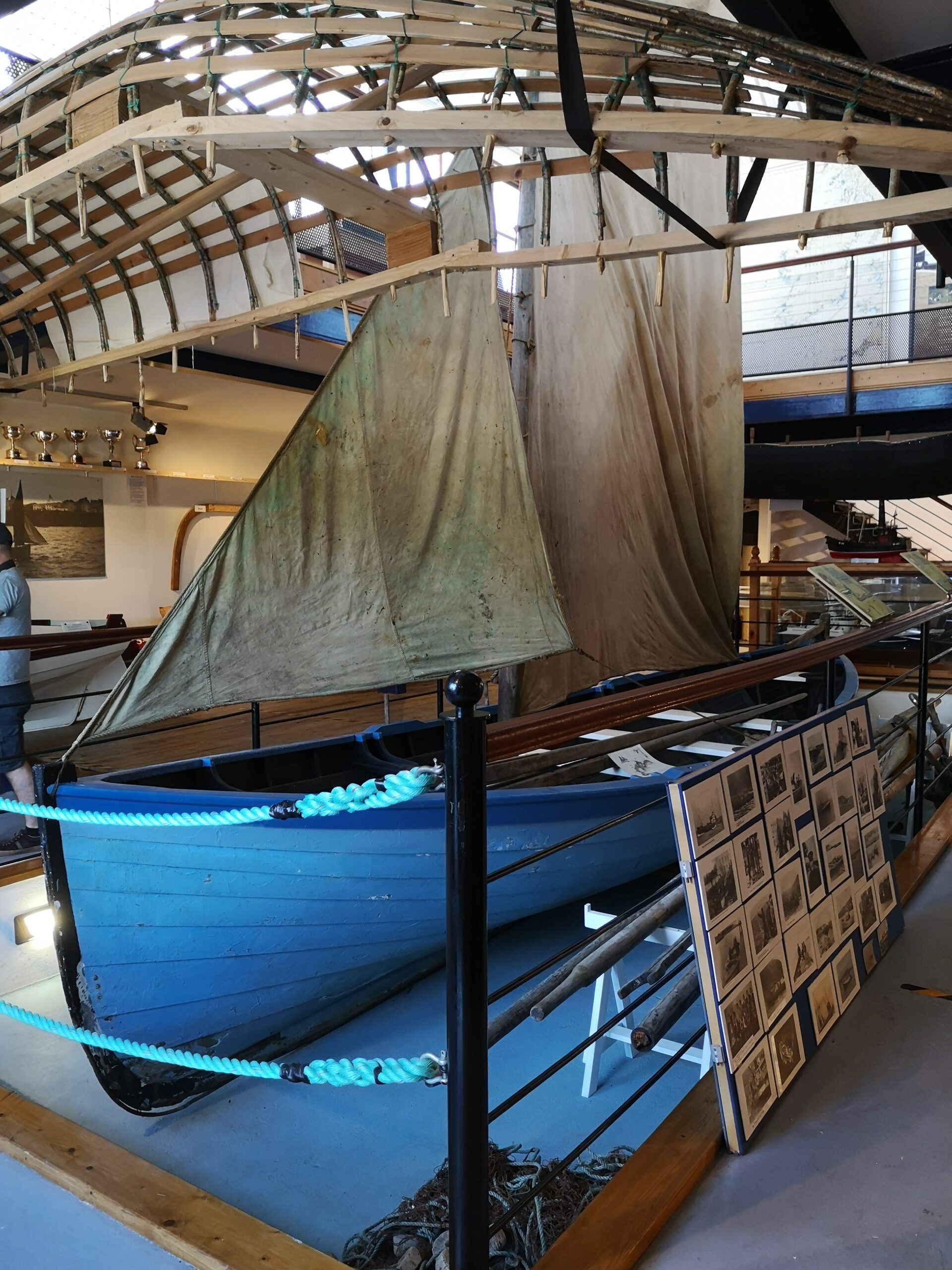 The main feature on the ground floor is an immersive example of a Drontheim, a traditional fishing boat used along Ireland’s North Coast.

The name “Drontheim” is a corruption of the word Trondeim, the port of the Norwegian coast where the boats originated. Pigged with a simple sprit-sail and jib or rowed by four men, the Drontheim was used for net and line fishing and also for transporting seaweed, turf, goods, people and livestock to and from the coast’s many Islands. 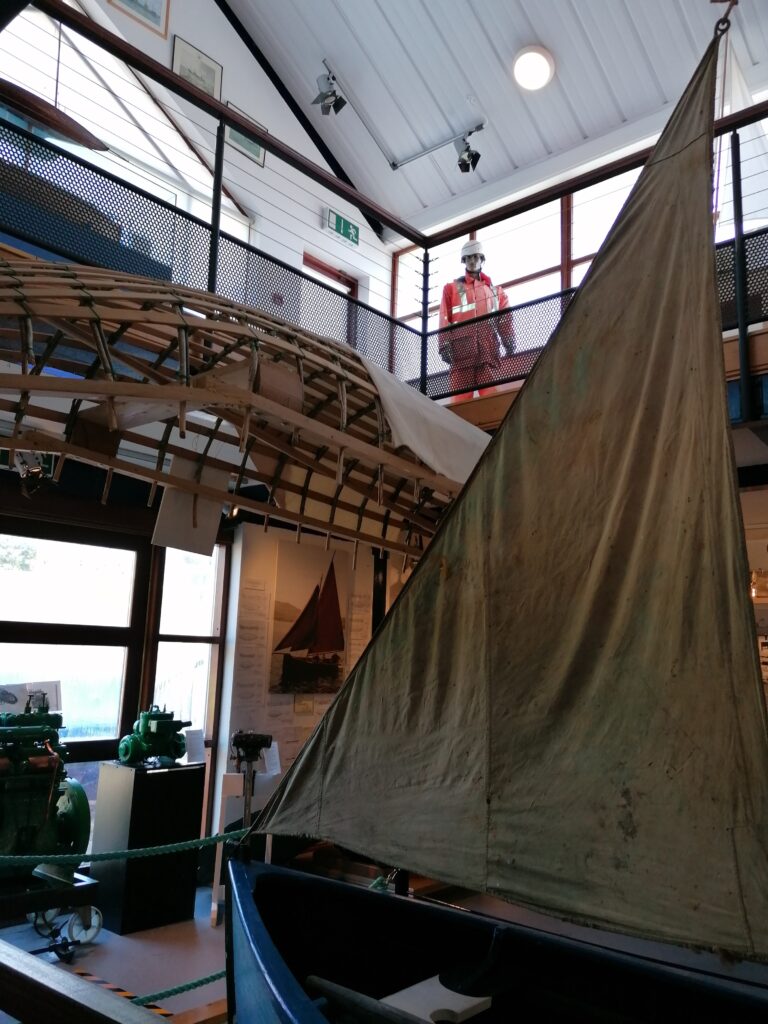 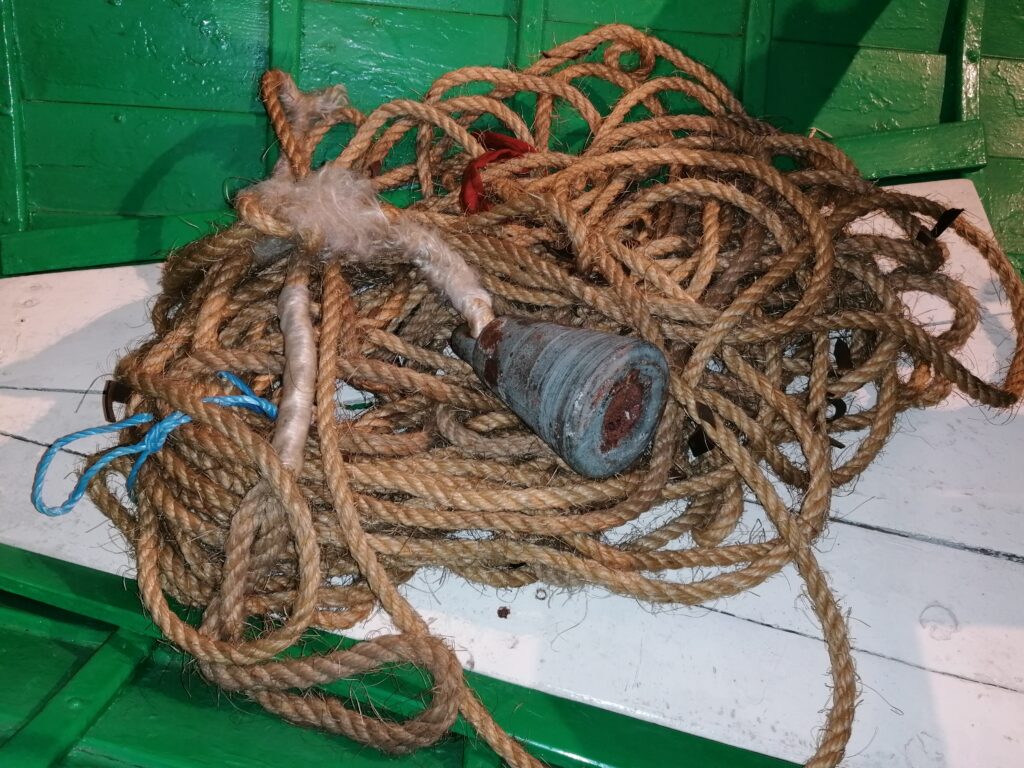 One of the first and most valuable inventions in navigation was the leadline. Since the around the 5th century BC, the leadline has been used to both measure the depth of the water and determine the characteristics of the sea floor.

The lead sinker has a hollow in the base. This would have been filled with tallow or grease. When sinker hit the bottom, a sample of the material, sand, gravel, mud, would have stuck to it so the men would know the bottom conditions. The line is marked at 3 feet and 1 fathom intervals with various materials so the user can measure depth by sight or feel of materials at night. 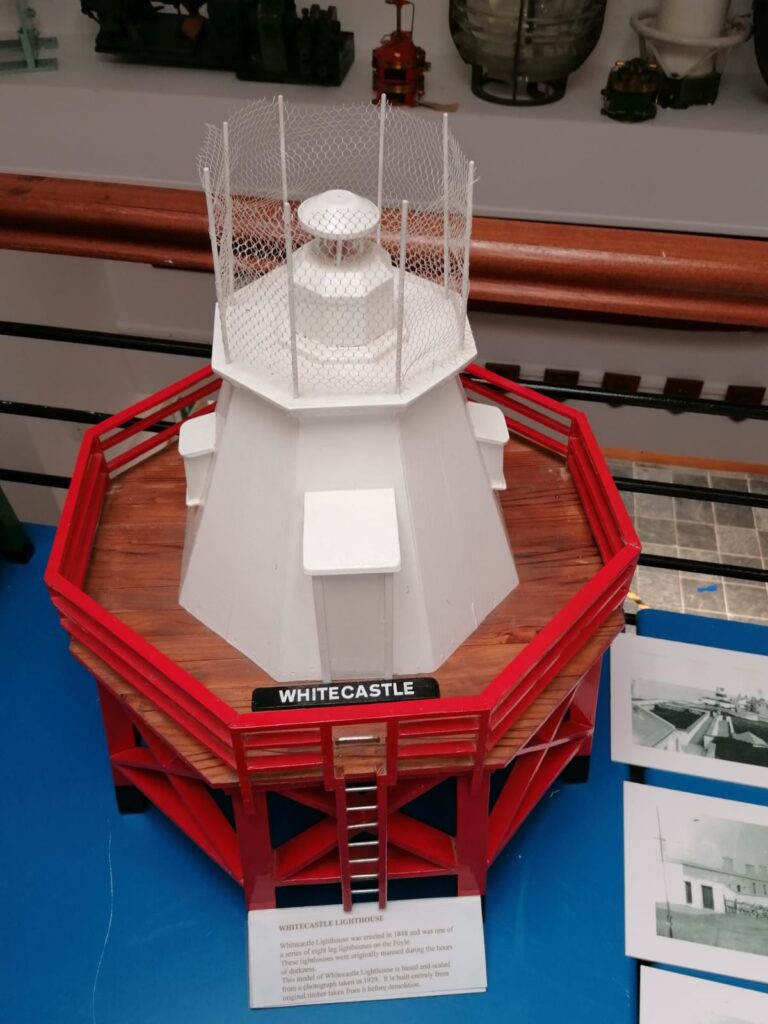 Whitecastle Lighthouse was erected in 1848 and was one of a series of eight-leg lighthouses on the Foyle. These lighthouses were originally manned during the hours of darkeness. 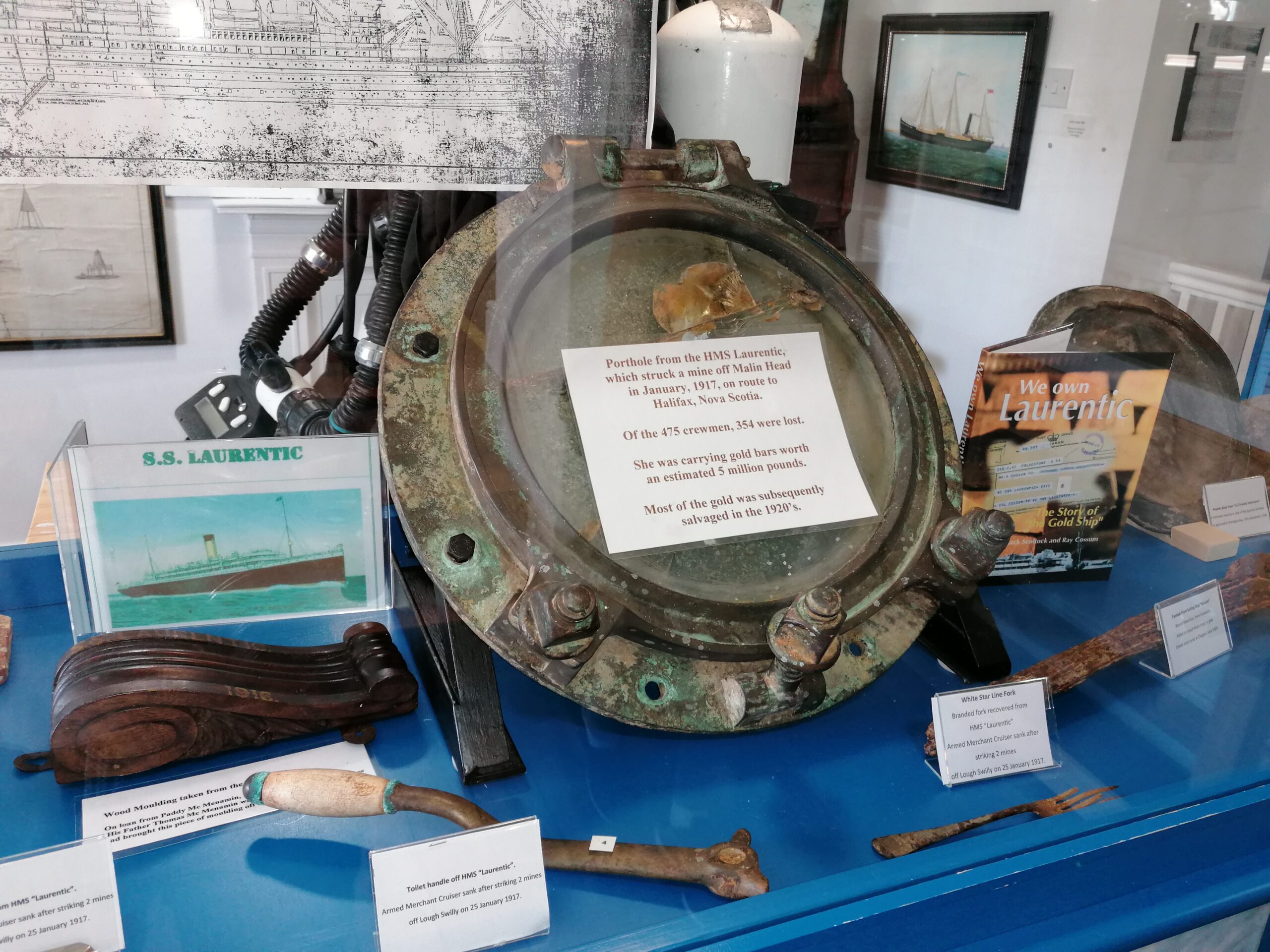 Learn all about the shipwrecks off the Donegal coast including short but remarkable career of the SS Laurentic, a liner from the famous White Star Line that tragically sank and the continuing rumours of her lost treasure and sunken gold. 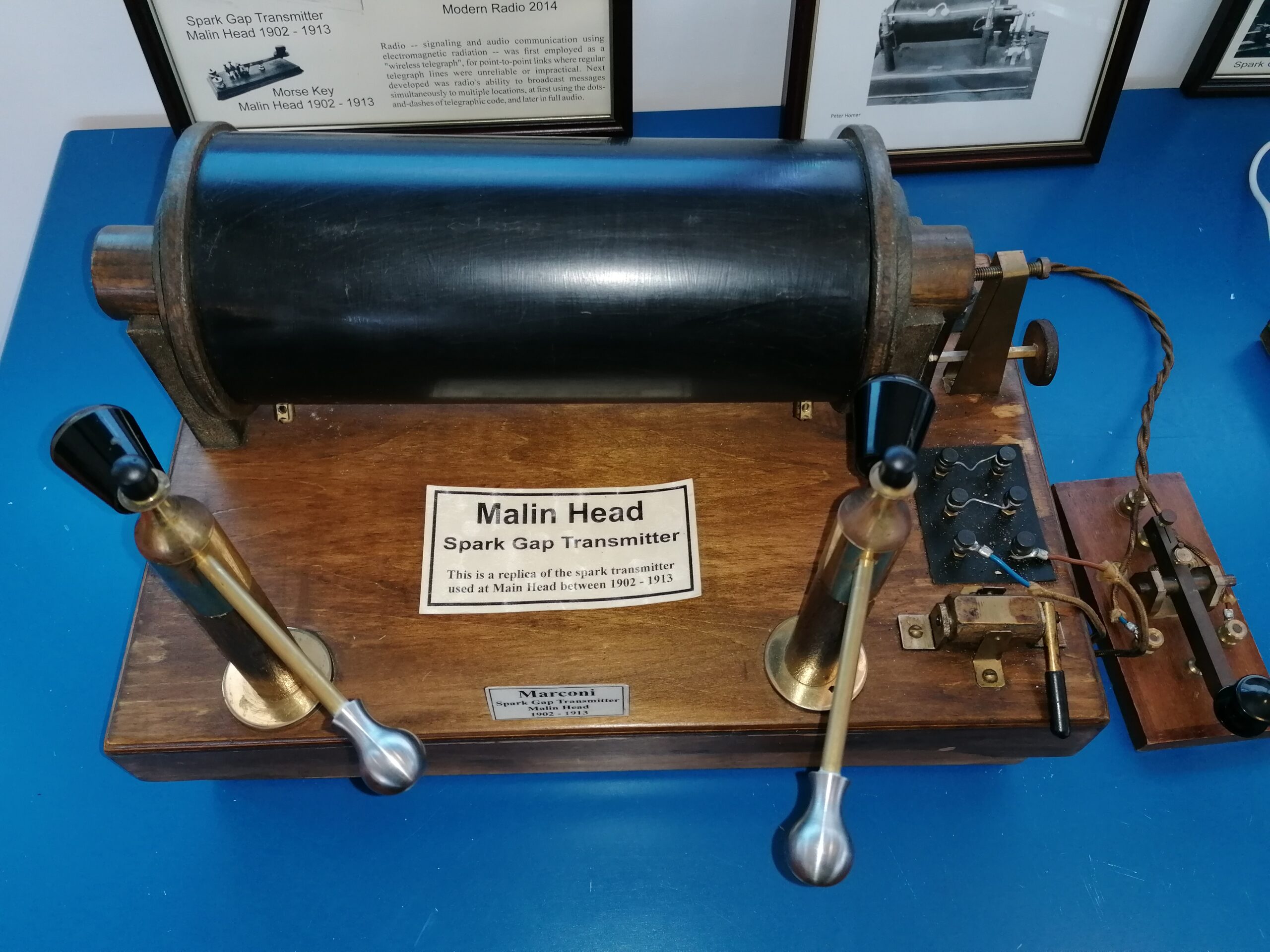 Model of a Marconi transmitter used as Malin Head station

A spark-gap transmitter was the first type of radio transmitter, generating radio waves by means of an electric spark. The operator switched the transmitter on and off with a telegraph key, creating pulses of radio waves to spell out text messages in Morse code.

The first practical spark gap transmitters and receivers for radiotelegraphy communication were developed by Guglielmo Marconi around 1896. One of the first uses for spark-gap transmitters was on ships, to communicate with shore and broadcast a distress call if the ship was sinking. They played a crucial role in maritime rescues such as the 1912 RMS Titanic disaster. 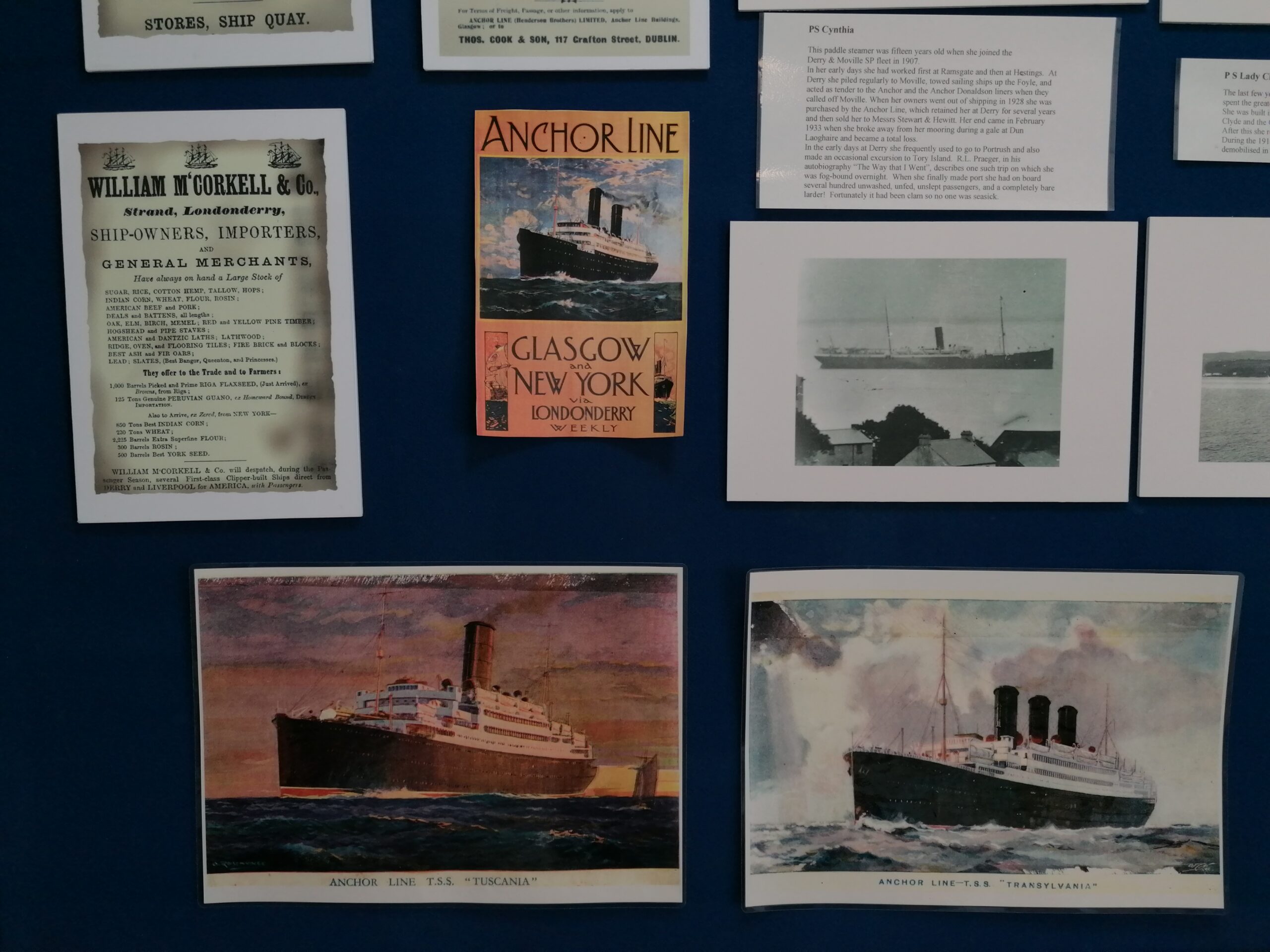 Liners and voyages of the past 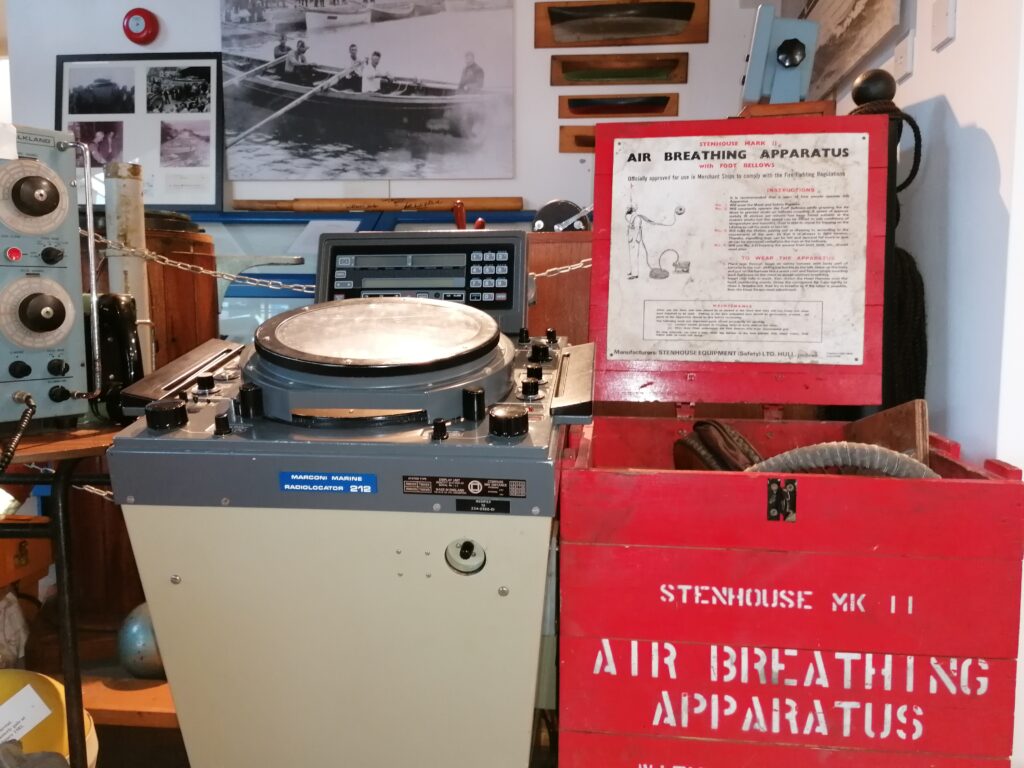 Technology of the past 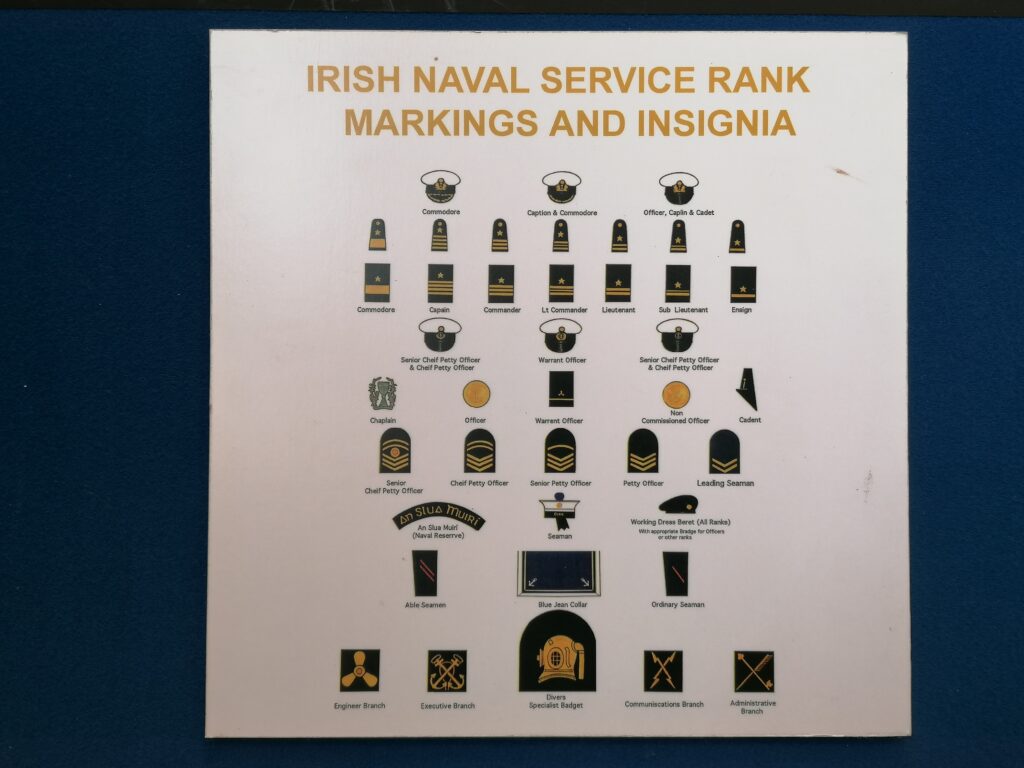 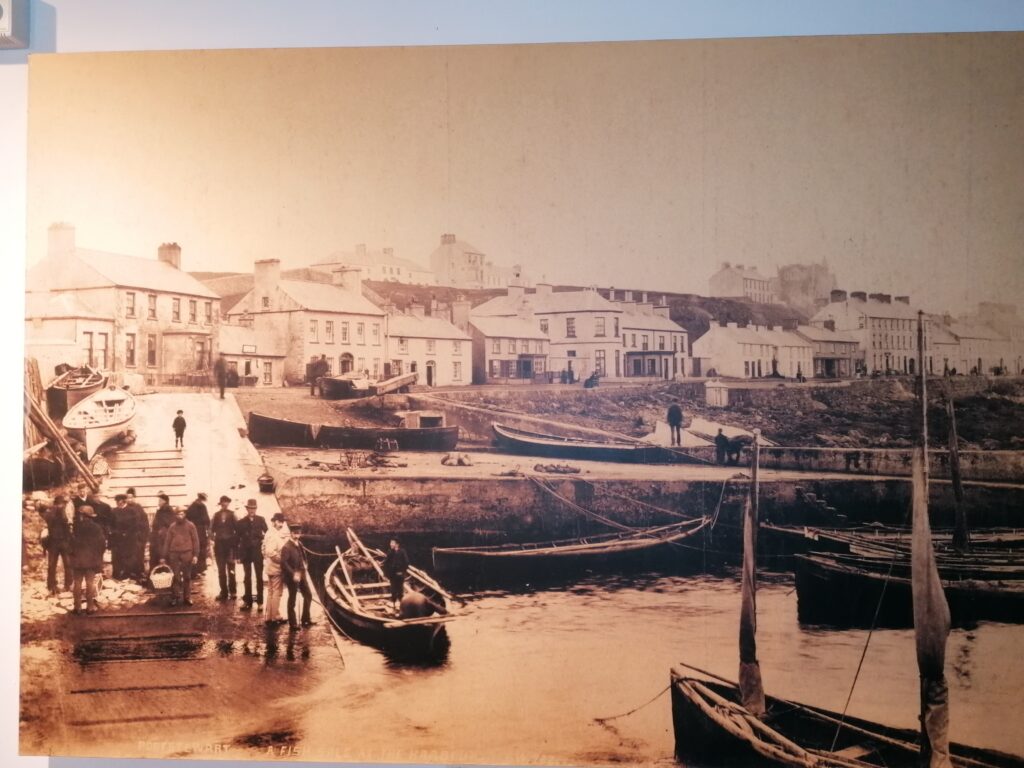 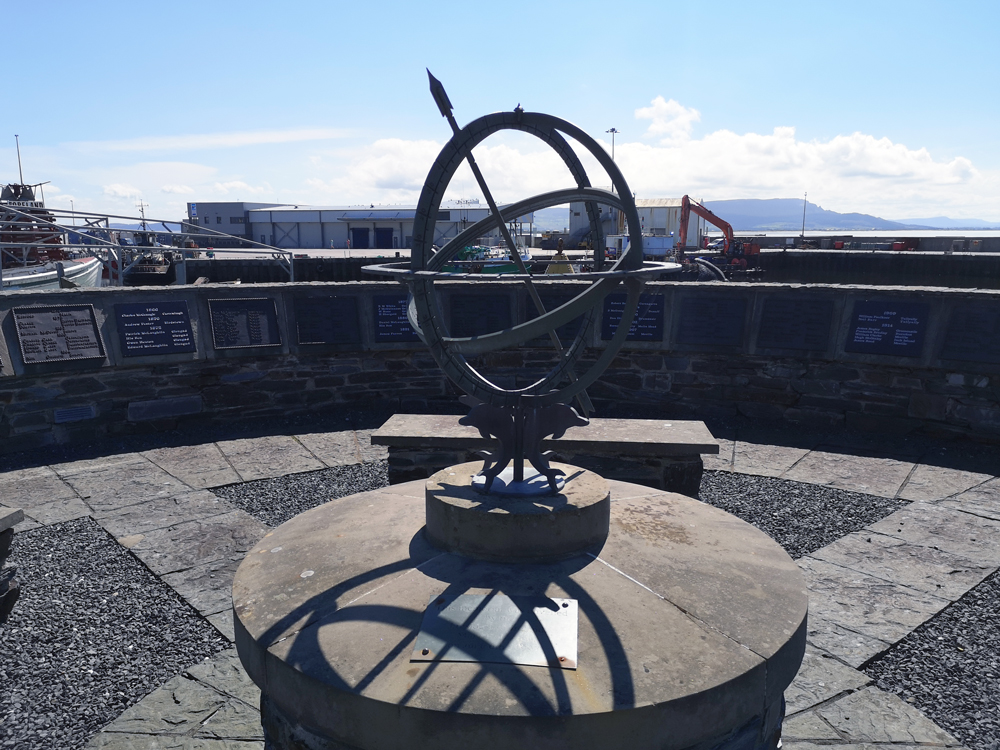 Right outside the museum is the Inishowen Maritime Memorial unveiled in 1997 by the Irish President Mary Robinson and commemorates all those from the Inishowen area who have lost their lives at Sea.

For maritime and history lovers a visit to the Inishowen Maritime Museum is a must. The museum is also home to a planetarium with a full immersion experience to learn all about the sea and the stars. Visit inishowenmaritime.com for more information.