Ireland’s sole surviving ocean going wooden sailing ship, the ‘Ilen’, which was re-built through a community educational programme in Limerick, will set sail from Limerick Docks this evening to follow the migratory journey of salmon in the Shannon River to West Greenland. ‘Salmon’s Wake’ is the title of The Ilen Project’s Community and Schools Education Programme which is highlighting the decline of salmon during International Year of the Salmon. 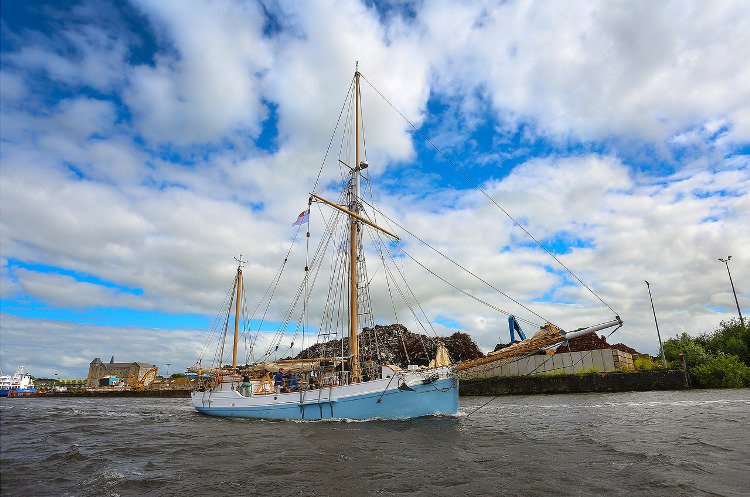 The Ilen Project operates the wooden sailing ship ‘Ilen’ as a community learning platform from her home port of Limerick. The rebuilding of the Ilen and her preparations for sea were completed in June and the crew from all parts of Ireland are looking forward to her longest ocean voyage since 1926.

The voyage follows a creative programme which saw building workshops and community days take place at multiple locations across the city with local schools, artists, craft makers and institutions all playing a role in bringing this majestic ship back to sea. Young people from Limerick and West Greenland are participating in this project and discovering what both communities share as North Atlantic maritime island peoples.

Sean Canney TD, Minister with responsibility for Inland Fisheries said: “The ‘Salmon’s Wake’ project is just one of a number of initiatives taking place across the country as part of International Year of the Salmon to raise awareness of what humans can do to ensure salmon and their habitats are conserved and restored against a backdrop of several environmental factors. Inland Fisheries Ireland is co-ordinating International Year of the Salmon in Ireland and is supporting the The Ilen Project’s Salmon Wake initiative to generate interest in the status of salmon populations and the role they play in Ireland’s economic and cultural heritage”, he added.

Atlantic salmon populations are widely distributed throughout Irish freshwaters with over 140 such systems designated as salmon rivers. While in the 1970s, the number of Atlantic Salmon returning to Irish waters peaked at 1,800,000, the numbers returning have decreased by 70 per cent in recent decades.

Gary MacMahon, Director of The Ilen Company said: “The Ilen is today setting off for its longest voyage in decades. It is the culmination of a lot of hard work by so many in our community who helped us realise our vision of reimagining this impressive ship. Throughout this journey, participants in the project have shared and learnt skills through the build which will remain with them for a lifetime. It is a symbol of what can be achieved when people work together and it is fitting therefore that our ‘Salmon Wake’ journey is highlighting the decline in salmon populations.”

Dr Ciaran Byrne, CEO of Inland Fisheries Ireland said: “We know that for every 100 salmon that leave Ireland to go out to sea, 95 don’t make it back due to a range of challenges which they face at sea. The Ilen Projects ‘Salmon’s Wake’ programme is a timely tribute to this iconic species during International Year of the Salmon and it is hoped that it will help create awareness around their decline in Ireland and across the northern hemisphere.”

The Captain of the Ilen will provide updates on the ship’s progress as it follows the route of salmon migration to West Greenland as a guest blogger on Inland Fisheries Ireland’s blog www.fishinginireland.info. For more information about the Ilen Project, visit www.ilen.ie and to learn about International Year of the Salmon, visit www.fisheriesireland.ie/iys .