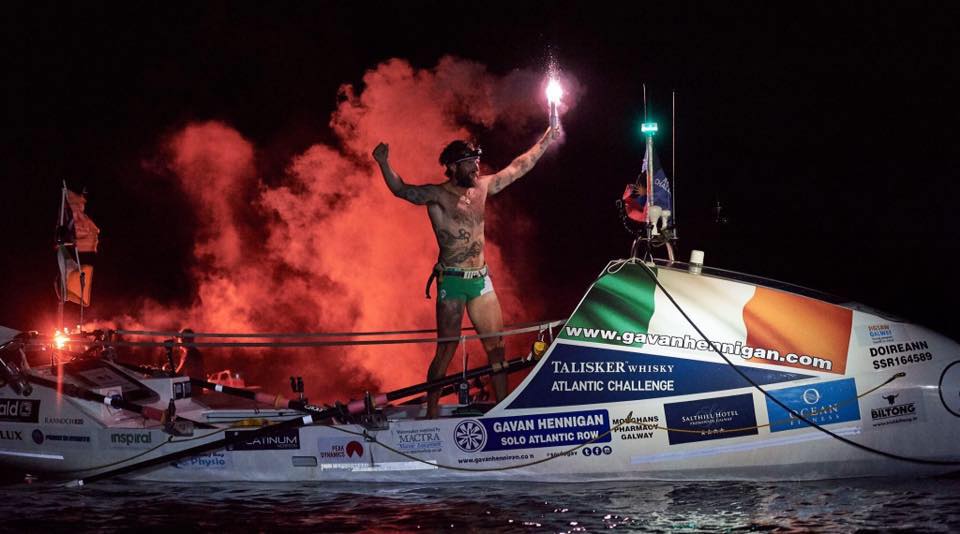 Hennigan, a 35-year-old from Knocknacarra, Galway departed on his 5,000km solo crossing on the 15th December as part of the Talisker Whiskey Atlantic Challenge. This is one of the toughest challenges on the planet and Hennigan battled solo against the Atlantic from La Gomera in the Canaries to Antigua in the Caribbean.

A total of 29 athletes competed in the Atlantic Challenge, many of whom were in teams but only four, including Hennigan, had the added burden of a solo crossing.

Hennigan completed the challenge in third place last night in an amazing 49 days, 11 hours and 37 minutes, a new Irish record. The previous record for an Irishman crossing this route was set by Sean McGowan in 2010 at 118 days, and an Irish-born Briton, rowed across the North Atlantic from west to east in 55 days in 1987.

The journey was grueling and he faced howling winds, sleep deprivation, sun stroke and fatigue, sometimes rowing up to 19 hours a day. All his hard work was for a good cause and the money he raised will go to Jigsaw Galway and Cancer Care West.

Hennigan said “ I had so many messages of support. I’d get up some days and I’d be struggling but when I read the positivity in those notes and comments – from complete strangers – that would motivate me to get back on the oars and do it for them. To do it for Ireland.”

“The last seven days have been relentless. At times, I’ve rowed up to 19 hours a day and yesterday when I woke up, I decided it was time to finish this. I’ve rowed for the past 14 hours straight. I gave that my all.”