The National Biodiversity Data Centre has launched a new marine citizen science project called ‘Explore Your Shore! The project focuses on recording intertidal and coastal marine plant and animal species, and building a network of active marine biodiversity recorders in Ireland. The records obtained will improve our knowledge of marine species distributions around the Irish coast.

Explore Your Shore! is calling on members of the public to get involved by submitting their records of intertidal and coastal animals and plants via ExploreYourShore.ie. The project is also asking the public to survey specific habitats and species using a suite of online surveys. As part of the project, a number of survey and identification workshops will be held across Ireland. 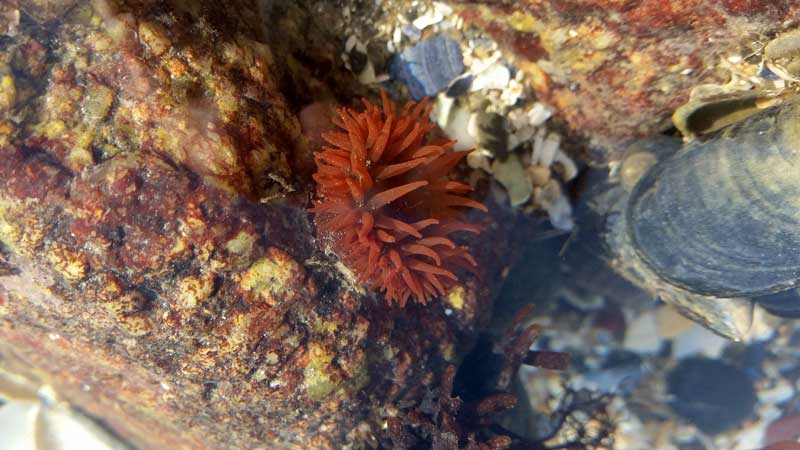 The records collected will be used to map the current distribution of intertidal and coastal species in Ireland. Explore Your Shore! will assess the use of marine plants and animals as indicators of water and habitat quality, and to monitor the impacts of climate change. The project will also seek to map the distribution of invasive marine species such as wireweed, slipper limpet and Chinese mitten crab.

At a stakeholder workshop held on Bull Island to mark the launch of the project, Dave Wall, Citizen Science Officer with the National Biodiversity Data Centre said: “Our shorelines are inhabited by a diverse range of marine plant and animal species that are readily identified by the public. The presence of particular species on a given stretch of shoreline can provide an indication as to the water quality and habitat quality at that location.”

The National Biodiversity Data Centre’s Director, Dr Liam Lysaght, added: “Despite being an island nation the importance of Ireland’s intertidal biodiversity has not received the attention it deserves. This initiative aims to get people more engaged in discovering Ireland’s shoreline and the wonderful biodiversity it contains.”

Explore Your Shore! offers a suite of surveys to enable the public to get involved in marine citizen science data recording. The project aims to inspire people to get out and about on our coastline and to explore and discover the rich diversity of life on our shores. Participants will be able to map and explore their records via the National Biodiversity Data Centre’s Citizen Science Portal, as well as benefitting from the physical and mental wellbeing obtained by spending time by the sea.

Thanks to all who attended our #ExploreYourShoreIRL stakeholder workshop at Bull Island. Great #citizenscience talks & idea sharing. Thanks to @EPAIreland for funding and @DCCParks_Biodiv for providing the venue & lunch. Visit https://t.co/OZBWhasHZR for project info. pic.twitter.com/CVl0lyMW6d

The project is also partnering with a number of existing coastal biodiversity recording schemes such as Seasearch Ireland diving surveys, Coastwatch eco-audit surveys and Purse Search Ireland recording of shark, skate and ray egg cases. In addition to two existing surveys focusing on casual record collection and beach biodiversity, two more Explore Your Shore! surveys will be rolled out this summer, focusing on rocky shore biodiversity and photo-recording intertidal species.

If you would like to participate in Explore Your Shore! further information, survey forms and other resources are available at www.ExploreYourShore.ie The National Biodiversity Data Centre App is available to download for iPhone or Android via their website www.biodiversityireland.ie Explore Your Shore! is possible thanks to funding provided by the Environmental Protection Agency to promote citizen science and awareness of water quality in Irish freshwater and coastal aquatic habitats.