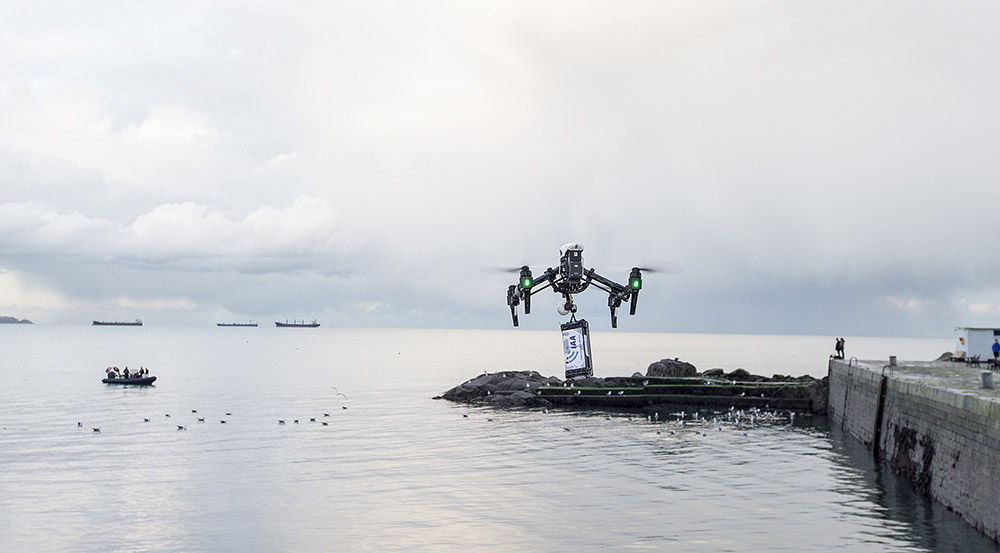 The Irish Aviation Authority (IAA) approved flight was organised by 10 year old student, Belle Moore,  as part of research for her project on drones for the Intel Mini Scientist Competition. The IAA helped Belle with her research, providing her with details on the safety regulations for drone flight in Ireland. This flight is the first parcel delivery drop by drone that the IAA has sanctioned in Ireland.

The package included a number of emergency supplies including emergency thermal blanket, an Epi-pen, bandages, plasters, thermometer, wipes ,burn dressings, water and high-energy bar. These were secured in a waterproof container attached to the underside of the drone.


The flight took took two minutes to complete from take-off to parcel drop, with the drone (a DJI Inspire 1) taking the parcel, weighing 250g from the shoreline to a boat at sea almost 200m away.

Ralph James, the IAA’s Director of Safety Regulation said “We’re delighted with the success of the first official parcel delivery in Ireland via drone under controlled conditions which met all regulatory requirements. The application of drone technology is vast and the IAA will continue to foster, promote and encourage its use with the emphasis, as always, on safety.”

Belle will present her report ‘Using Drones to Deliver Parcels in Dublin: A Feasibility Study’, at the Grand Finals of the Intel Mini Scientist Competition in the Helix in DCU on Friday the 3rd February.