Lagg beach has seen dramatic erosion of its dunes over the last year.

The popular beach in Donegal hosts some of the highest sand dunes in Europe but which are now at risk due to the continuing erosion that has been made worse by winter storms. An area once accessible by cars has now been completely wiped away in less than twelve months.

There are increasing calls for immediate action to prevent the situation deteriorating further. 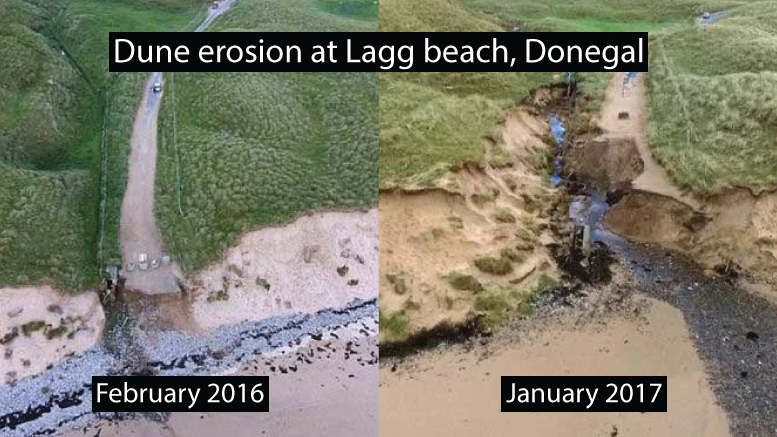 The images above were shared by Donegal local Peter Homer and depicts the severe damage to the dunes that’s occured since February 2016.

Speaking to the Derry Journal Deputy MacLochlainn said that he and Counicillor Doherty both called on Donegal County Council, working in partnership with the Office of Public Works (OPW) and the National Parks and Wildlife Service, to source the funding for urgent remedial works. They added that a comprehensive study will also have to be commenced with a report and recommendations for action.

Deputy MacLochlainn said: “This is an immensely important amenity and while some of the coastal erosion along the strand may prove to be unstoppable for now due to tidal and sand bank changes, there are remedial engineering actions that can be undertaken at the entrance to the strand and perhaps elsewhere, if the funding can be sourced”.