After all the excitement around the killer whales spotted off Howth last week, there have been some more unusual cetacean sightings around Dublin.

This time, a dolphin has been spotted swimming in the River Liffey just this morning. 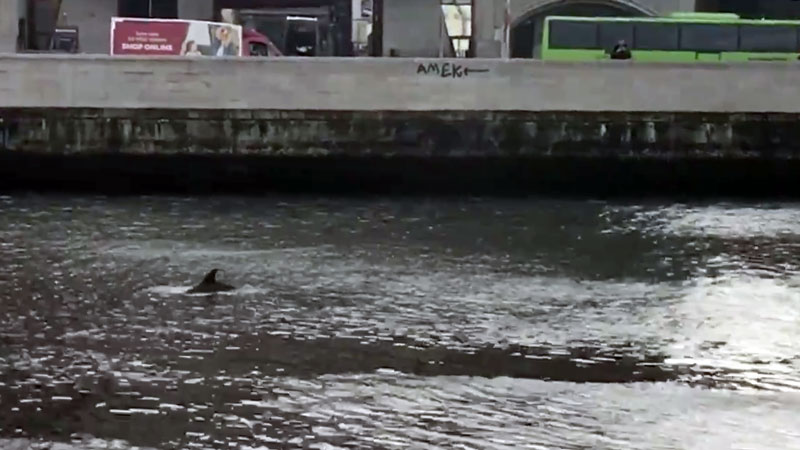 Thanks to the ubiquity of cameras lots of footage has promptly appeared online of the dolphin, particularly around the North Wall Quay area and near Butt Bridge.

A dolphin has been spotted in the River Liffey in Dublin city centre. | Video: @DarrenFarrelly1 pic.twitter.com/8dHXtAbKwV

From Dolphin’s Barn to a Dolphin’s yarn! 😀 We had a very welcome visitor outside the Custom House today. @IWDGnews has been told. pic.twitter.com/bN9rYFpUFq

So… eh… there’s a dolphin in the Liffey. pic.twitter.com/DXMDFC5npd

Commenting on our curious visitor, The Irish Whale and Dolphin Group said “This is not the first incursion by small cetaceans up the River Liffey, on 15th August, IWDG received another record of a small cetacean at the East Link toll bridge that was reported by Eoin Mullowney.”

“As recently as 8th November, a pod of around 20 common dolphins were recorded from a commercial fishing boat off Laytown, Co. Meath area, so we know this species is currently to be seen off our east coast.”

So what’s the explanation for the appearance of this dolphin in the River Liffey today? For sure we don’t know, but it’s certainly a most welcome guest to brighten a gloomy Wednesday.