Coastal Communities are the focus this week on the Marine Institute’s Oceans of Learning series. The Marine Institute and partners are celebrating our world’s shared ocean and our connection to the sea in a 10-week series, sharing news and offering online interactive activities, videos and downloadable resources on a new marine topic each week.

A series of watercolour illustrations and interviews have captured the importance of the ocean to coastal communities in Ireland and Wales as part of BlueFish, an EU-funded project. Through engaging with coastal communities using art, BlueFish links knowledge and understanding of the marine resources and the potential impacts of climate change on the Irish and Celtic Sea ecosystem.

“Without the ocean, we wouldn’t have a living: it’s our only source of income in this rural part of Ireland. Climate change is definitely happening: growth periods are longer than they ever were. But higher water temperatures and higher rainfall could be catastrophic for our business,” according to Oyster and mussel fishermen, Cromane, Co. Kerry. 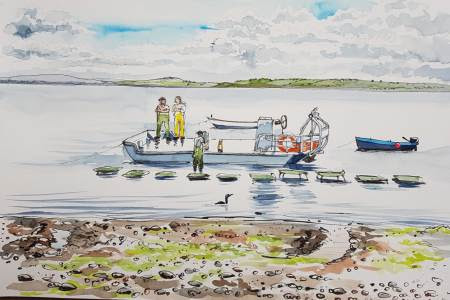 Urban sketcher Róisín Curé and a scientist from the Marine Institute visited coastal communities in Ireland and Wales. Róisín created watercolour illustrations showing the people whose livelihoods are dependent on the ocean and who have a profound and immediate interest in the effects of climate change. Also interviewed were fishermen, restaurateurs, shellfish producers, operators in the tourism sector and seafarers to gather an understanding about how they benefit from the ocean and their thoughts on climate change. The results of the interviews and art through watercolour illustrations created an accessible way for the public to understand the importance the ocean has on livelihoods in coastal communities. 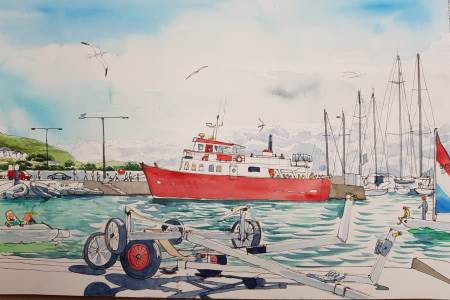 By bringing artists and marine scientists together and working closely with project partners and coastal communities, the Marine Institute has developed a structured portfolio of artwork that is intended to promote a better understanding of the impacts of climate change on ecosystem goods and services; to demonstrate how climate change may impact these; and to highlight the wider societal benefits of healthy ecosystems in Irish and Welsh coastal communities that border the Irish and Celtic Sea(s). The artwork produced as part of the BlueFish project can be viewed in this video.

Dr Paul Connolly, CEO of the Marine Institute explained that “a central part of the project was listening to people living and working in coastal communities, and gathering their opinions about climate change and learning about how it might affect their livelihoods. This was a unique opportunity to talk directly to coastal communities and capture their perspectives through art,” Dr Connolly said.

By engaging with people and industries dependant on the sea, the information gathered highlighted how they benefit from the ocean, their thoughts on climate change, and particularly how it was going to affect their lives and businesses.

“Many of the stories reaffirmed the importance of the age-old relationship between people and the sea, noting that the sea is the life-blood which sustains these communities. The general consensus in both Ireland and Wales coastal communities was that climate change is happening. There was an acknowledgment and a realisation amongst the people interviewed that there was a real looming threat to their livelihoods,” said Dr Connolly.

Many people commented on how they were seeing changes to their climate in their local communities. A local businessman from the Isle of Anglesey commented, ‘in the 38 years I’ve been working here, the road would have flooded twice a year. Now it floods much more often.’