The Irish Coast Guard are once again participating at the BT Young Scientist Competition this week in Dublin’s RDS.

With over 60,000 students expected to attend the event, the Coast Guard considers the event to be an excellent opportunity to highlight water safety and to increase awareness among young people on the workings of the Coast Guard. 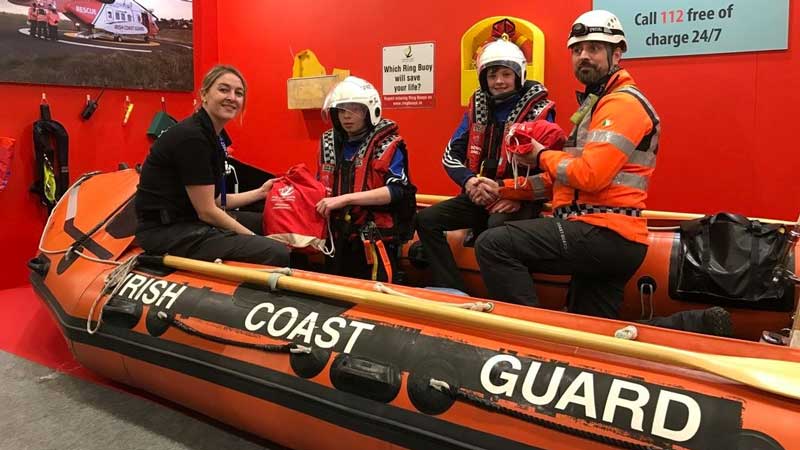 This year the Coast Guard will run an hourly “Emergency Challenge” competition for students; participating students will be given details of a water based emergency they have just witnessed and then have to complete the steps on reporting that emergency by phone to both the 112 ECAS operator and subsequently the Coast Guard controller, this will include attaining GPS co-ordinates from their phone.

For the second stage the participants will step into the shoes of a Coast Guard volunteer and after donning the safety gear step into a Coast Guard rescue boat where they will rescue the casualty, with the casualty on board they will then perform CPR. A lot to complete in a short period but the students are introduced to some essential life skills – calling 112, provision of accurate positional information utilising including using smart phone functionality, correctly fitting of a Life Jacket, throwing a Ring Buoy and importance of keeping them safely stored, finally last but not least performing CPR; skills that may help them one day if needed.


This is the Coast Guard’s fourth year to attend the event in collaboration with the ECAS team. ECAS providers. ECAS is the Emergency Call Answering Service plays a pivotal role in the first stages of an emergency 112/ 999 call before they transfer the call to one of the four emergency services control rooms – Gardaí, Ambulance Service, Fire Service and Coast Guard. One of the challenges for the Coast Guard and other emergency services is to obtain early and timely information on any incident.

Awareness of what number to ring for in an emergency is critical as is the public understanding of the process involved in calling 112/999, understanding where someone is located is critical in ensuing that the right resources are quickly deployed. This year as part of the exercise particular emphasis is being placed on the ability to provide accurate positional information using tools such as smart phone based GPS

In addition to the competition and with the aim of keeping the stand interactive the Coast Guard will also be running a demonstration each hour on Life Jackets and Water Safety. This will include getting the students to wear and activate a horse shoe Life Jacket to show how that a properly secure Life Jacket can easily allow you to freely move around but have the benefit of keeping you afloat if needed. Participants will be reminded that close on half the people who drown don’t have intentions of being on or in the water, these include people engaged in coastal or rock fishing.