Minister for Agriculture, Food & the Marine, Michael Creed, announced Ireland’s Clean Oceans Initiative and called for the participation of the entire Irish trawl fishing fleet in the scheme by 31st December 2019. His ambition is to have all Irish trawlers at every pier and every port actively participating in Ireland’s first co-ordinated initiative on land and at sea to collect, reduce and reuse marine litter and clean up our marine environment. Building on the very successful Fishing for Litter campaign the Minister has challenged BIM to work with the fishing industry to ensure participation of 100% of Irish trawlers in the Clean Oceans Initiative by the end of 2019. BIM will report to him quarterly on the progress being made to meet that target. 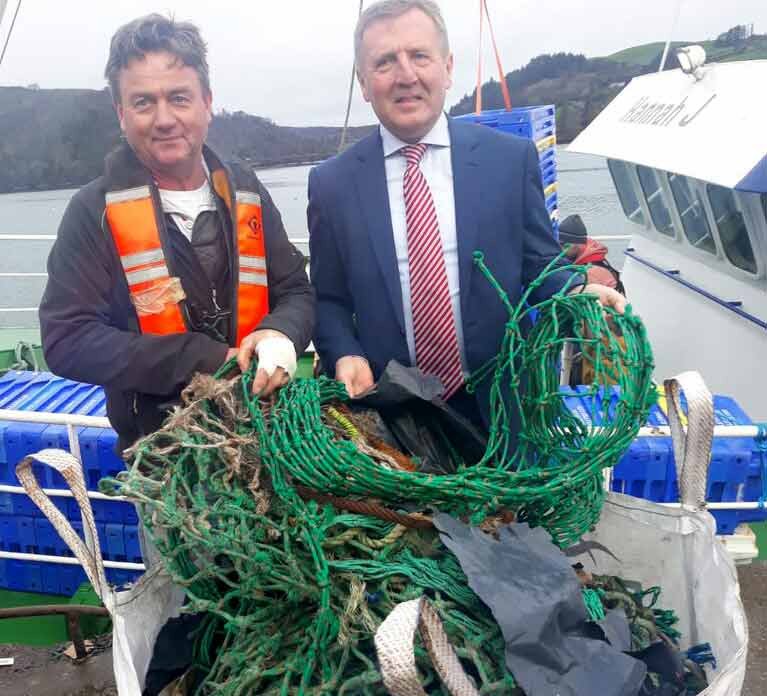 Creed went on to say “We can only solve the problem of plastics in our oceans by working collaboratively. Ireland’s “Clean Oceans Initiative” which I am launching today, aims to mobilise every member of the Irish seafood sector and its wider communities – every fishing port, fishery harbour and pier in Ireland – to take action. I believe that our fishing industry will build on the good work they have been voluntarily doing to date on marine litter, to get every trawler in the Irish fleet involved, to show how we can begin to address this great global challenge of our time. Everyone has a responsibility for marine litter and we intend to take on that responsibility through Ireland’s Clean Oceans Initiative.”

Fishermen have been living in harmony with the marine environment since the beginning of time, they share Minister Creed’s concerns and they have a key role to play in recovering discarded plastics from the oceans. Our fishing vessels are towing nets through the waters around our coast on a daily basis and often find debris, including waste plastics, when the nets are hauled. Minister Creed wants to facilitate our fishermen to bring this waste home from their fishing trip and he is encouraging our fishermen to recover as much plastic as possible from the seas around Ireland. He has made funding available under Ireland’s European Maritime and Fisheries Fund (EMFF) to support the new Clean Oceans Initiative to provide on-board storage facilities and on-shore infrastructure for environmentally friendly disposal of all plastics, waste, ghost fishing gear, etc. recovered at sea. The on-shore infrastructure will also be available to fishermen and aquaculture operators to dispose of unwanted fishing gear and other items with a plastics content.

In addition to the Clean Oceans Initiative Minister Creed has asked BIM to assemble a collaborative team representative of all stakeholders to focus on solutions for marine litter prevention and removal. The team will include fishermen and fish farmers, net makers, harbour authorities, fish processors, community groups, Fisheries Local Action Groups (FLAGs), academics and NGOs. He has also asked BIM to include a broader outreach to the wider coastal community, of which the seafood community are a vital and intrinsic part and to report back to him by the end of 2019 with proposals for further innovative solutions for the prevention and removal of marine litter.

Contamination in the marine environment is not a new phenomenon and up to 80% of marine debris is made up of plastics. Total World production of plastics reached 335 million metric tons in 2016. Plastics do not biodegrade, they photo-degrade, breaking up from recognisable items of all sizes and shapes into tiny particulates. The risks posed to marine wildlife by waste plastics has motivated research to assess the extent of the problem and this is welcomed but we cannot afford to delay remedial actions so the Minister for Agriculture, Food and the Marine, Micheal Creed has decided to act now and promote all possible measures to prevent plastics from entering our marine environment and to remove as much plastics from the marine environment as possible.