A team of scientists on board the RV Celtic Voyager during a recent survey to understand the habitat use of elusive beaked whales, got more than they bargained for when they encountered four separate groups of breaching whales within a couple of hours survey effort near the Rockall Trough. 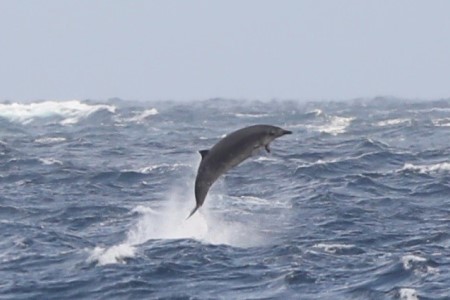 “We think that the groups encountered were either Sowerby’s or True’s beaked whale, possibly both, they are incredibly difficult to positively identify at sea,” said Dr Patricia Breen, NUI Galway, Chief Scientist on the survey. We know that they undertake huge dives to great depths of up to 2500m for an hour at a time. They feed mostly on squid but also deep sea fish.

This was a collaborative study between NUI Galway, UCC, Marine Institute, Centre for Marine and Renewable Energy, Marine Conservation Research and Washington State University. The aim was to characterise beaked whale habitat using acoustic technology in a small study area, as the whales are more likely to be heard rather than seen. As well as using a hydrophone to detect whale clicks the team also characterised the habitat by recording oceanographic information such as salinity, temperature and depth as well as the fish and squid species in the area, their most likely food source.


Dr Ailbhe Kavanagh, UCC said “We had seen a group of breaching beaked whales the previous day and upon finishing up our acoustic transects decided to return to the area we had sighted them in previously. While steaming through this area we encountered four groups of beaked whales, all breaching, and all groups of between two to four individuals.”
“The amazing thing about this encounter was the high number of sightings in such a small and specific area. Less than 30km separated the first and last sightings. This highlights an area that, whilst small, is potentially of huge importance to beaked whales in Irish waters. We hope to investigate this area further in the future,” said Dr Patricia Breen.

During the survey the team caught many species of fish which live in the mesopelagic zone between 200m and 1000m deep. Professor Emer Rogan (UCC) said, “Recent studies have shown that some beaked whale species prey on both squid and mesopelagic fish. It is likely that the fish species we were catching in our nets is the reason the whales are here, to feed. The information collected on this survey will we helpful in our efforts to learn more about the species and to ensure adequate protection of the habitat of beaked whales in Irish waters”.