The second in our series of Irish maritime inspired poems by the talented Dublin poet Daniel Wade.

The recent invasion of our waters by the massive super-trawler Margiris has rightly caused serious concern. Not just for the marine life that it decimates in it’s wake but also for the coastal communities who’s vital way of life is threatened by their industrial greed. Along with the timely screening of the documentary Atlantic the public calling on the government to do something about these ships and ban them completely from Irish waters.

In this poem Wade explores the recent inroads made by the super-trawlers into Irish waters. 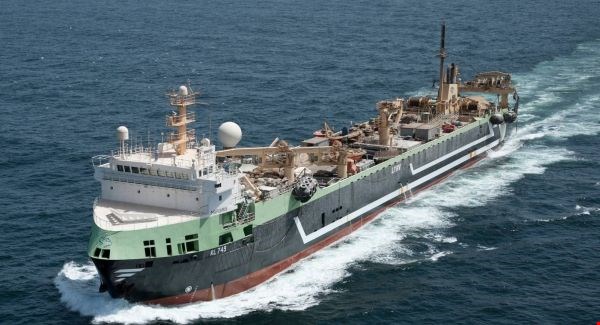 slithering in the black spume,

her size unclear in a fizzle of rain. It was a slow night, the stars overheated,

burnt clean of radiance. I sat slumped with my iPad on my lap,

and touch-sensitive, eyes bulging over an electronic map. The ship’s net

spread for miles, a mesh wing,

sinking deeper and deeper down, burrowing the Atlantic, past oil slick

without malice or mercy, pots I’d rigged with a tracking device, linked

into the app that I now watched, the seething radar

trying to readjust itself –

MarineTraffic.com my long-range look-out, testifying all names and bearings,

all positions, letting no vessel

slip by unnoticed. How much more of our livelihoods would they scoop

away from us? Who made us criminals in our own waters?

The tide was slackening. In the dark, I heard her winches drone in levered

from the dim element, glossy and phoenix-like. From a distance, lifejacketed

deckhands worked in a unit, ordered and ritualistic.

The reject catch was dumped back in the water, ton by metric ton. From

Arranmore to Tory Island, gulls flock to her stern,

hoping for a sample of her by catch. What quota shielded her, out there

and on the sly,

thornback while we were obliged to stay aground?

ruin was still to be faced in her long wake, body-slamming off

I knew boat-owner, chairperson and license holder would each feel

she’d be back, and there’d be plenty more like her: conveniently-flagged,

unchecked, unboarded and off the unyielding radar.

Who would stop her in the sortie for pelagic? We are no freer of our island

than the cliffs are of the breakers.

Our ministers sit on their hands, well aware, yet blatantly passive

of the offshore and suspect stratagem

of a swollen net, laying its gulping claim, wanter of waste, merciless

serving their efficient purge, from the green damp of deep-sea columns,

to the coastal, copious resource.